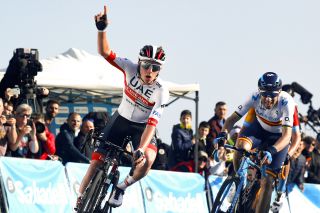 This time last year when Tadej Pogačar (UAE Team Emirates) blasted away to victory in the Volta ao Algarve's first summit finish at Foia, he was a little-known first-year pro, startling the established hierarchy with his powerful climbing style.

Fast forward 12 months and given Pogačar has now taken not only the Volta ao Algarve but followed that up with the Tour of California, as well as his first Grand Tour podium finish and three stage wins at the Vuelta a España. The young Slovenian is hardly an unknown force in the sport any longer – and unable, therefore, to surprise the top favourites like he perhaps did a year ago in Portugal.

Either way, it doesn't appear to matter. Because try as leading Valencia favourite Alejandro Valverde (Movistar Team) might to deliver one of his trademark accelerations and claim his first win of the year at Cullera's summit finish, Pogačar was able not only to follow El Bala but to come past the Spanish champion just before the line.

How to watch the Volta a la Comunitat Valenciana – live stream, TV, results

Once again, the old order has had to give way to the new, and in Valencia Pogačar has now claimed not only his first stage win of the season and his first leader's jersey but also the green points jersey and the Best Young Rider classification.

After 20-year-old Remco Evenepoel's (Deceuninck-QuickStep) triumph at the Vuelta a San Juan last week – this week it could well be Pogačar's turn in Valencia to keep cycling's young guns running the show.

"I really like Spain, I guess," Pogačar told reporters as he clambered precariously down the steps of the winner's podium perched precariously on the windy summit of the Cullera ascent high above the glittering Mediterranean.

It was pointed out to him that he was succeeding in the same terrain that favoured him so greatly last September. "The team did a really good job, too, and we were well-positioned before the finish and then it was full gas to the top," he said.

"I was just waiting on the other guys, I'd seen a video of the climb, so I knew what it was like and I timed it well. At the time I thought it was a little late, but it turned out to be perfect."

As for defending the lead, Pogačar admitted that Saturday's ascent, five kilometres long and with stretches of 26 per cent, was much harder than Thursday's, but he said he would do his best.

"I'm feeling more confident of my condition than I was this morning, but this was a five-minute test, and on Saturday it's a lot longer. We'll see. Saturday is a different story altogether, but any win is a good sign and I hope to continue like this."

Speaking to Cyclingnews before the stage, Pogačar was reserved about his chances on Wednesday's climb, although he admitted that "one of my big targets is to do well in the UAE Tour, where I want to be in my top shape." He'll be a leader for his team at the race.

"The winter was good, I was training without any interruptions, and I also spent some time in Sierra Nevada [ski station] training in January. No skiing – I'd have liked to sometimes – but just the bike." After the UAE Tour, the Slovenian will then go on to Paris-Nice and Milan-San Remo, then on to the Basque Country and the Ardennes Classics.

As for the Tour de France, he said, "I'm just going to learn. The Tour is very different to the Vuelta, so I'll have a lot to get used to there. And I'm doing the Dauphiné as well and I'll have training camps at altitude beforehand."

Pogačar agreed that last year represented a massive raising of the goalposts in his first full season as a pro. He believes that this year will be one of consolidation.

"I don't want to get ahead of myself, it's better to go step by step. If I can do as well as last year, that'll be great." And at Valencia's first summit finish, he certainly began laying the first foundation stone towards doing that.