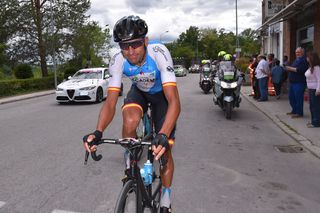 Spain’s former double national champion, Rubén Plaza, a stage winner at the Vuelta a España and Tour de France, has opted to retire after a career spanning nearly 20 years and with 26 victories to his name.

The 39-year-old, who has ridden for Israel Cycling Academy for the past two seasons, competed for the final time at Il Lombardia on Saturday, where he did not finish.

"I have been doing this for half my life - it’s enough," the Israel Cycling Academy rider, 39 said in a press release.

"It’s enough. I achieved all I could and I prefer to stop now on a positive note. It’s time for me to move on."

Born in the region of Alicante in south-east Spain, Plaza became a national road race and time trial champion at junior level in the 1990s, before getting his break as a stagiaire in 2001 with iBanesto.com, where he quickly forged a reputation as a reliable all-rounder.

Plaza's first pro win came in 2003 at the Spanish national championships road race at 23 years of age, despite having been recommended by a doctor to give up racing because of a knee injury.

The first of Plaza's three Grand Tour stage wins came in the final time trial of the Vuelta a España in 2005, which propelled him into fifth overall, his best ever Grand Tour result. Another stage win followed in the Vuelta 10 years later, in 2015, on a memorable stage through the sierras of Madrid when, at the last possible moment, Tom Dumoulin lost the race overall to Fabio Aru.

In the same year, Plaza had also won a transition stage of the Tour de France after a late attack en route to the town of Gap, which he viewed as the high point of his career.

Plaza was initially linked to the Operación Puerto doping scandal in 2006, but was subsequently acquitted – like numerous other riders – of any involvement by Spanish courts. He told Cyclingnews in 2010 that the anti-doping investigation had "ruined my career".

However, despite his pessimism, by that point Plaza was actually returning to top-level racing after two years racing in second division teams in Portugal in 2008 and 2009.

During that period, Plaza secured a victory in his home race, the Volta a la Comunitat Valenciana in 2008 - the final edition before the early-season stage race was cancelled for nearly a decade. Plaza also built up an impressive series of results in the National Championships, taking another road race title in 2009 and as well as securing six podium spots in the time trial.

In 2010 Plaza turned down an offer from Astana and returned to Caisse d’Epargne, remaining with the team as they switched sponsors to Movistar, after which came spells with Lampre, Orica-GreenEDGE and Israel Cycling Academy.

Plaza’s last win of his career total of 26 was the overall of the Vuelta a Castilla y León in 2018, one of several Spanish stage races on his palmarès.