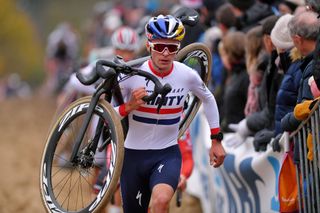 Like most professional riders, Tom Pidcock has seen his spring and early summer race programme wiped out by the COVID-19 coronavirus pandemic.

The British all-rounder had a number of major targets for the coming months, including the U23 versions of the Tour of Flanders and Liege-Bastogne-Liege, and the mountain bike World Championships. With those races now off the calendar – at least for the foreseeable future – Pidcock is staying at home in Leeds where he is mixing his time between training outside and Zwifting.

On Thursday he makes his eRacing debut on the online platform in the London International Pro/Am Invitational race but he is already thinking about the second half of the year, and how is versatility in a number of cycling's disciplines could be used as an advantage.

"On Thursday I'm doing the Zwift Classic and then I'll do one or two. I've use Zwift for training and it makes riding on the turbo a lot easier, and it means you're not staring at a brick wall," Pidcock told Cyclingnews during an interview conducted online.

"From what I've heard about the races there's a lot of people doing high watts so I'll just have to see how it goes. I won't be taking it as seriously I do a world championship.

"But when things get back to normal I think I've got a lot more options when it comes to racing and getting stuck in a bit more."

20-year-old Pidcock is still racing on the road at U23 level in 2020 before an expected move up to the WorldTour next season. While cycling attempts to find solutions surrounding its racing calendar, Pidcock is biding his time before evaluating whether his long-term plans will change.

The postponement of the Olympic Games until the summer of 2021 means that he could target the mountain bike title in Tokyo, while he also admits that he still has plenty to achieve at U23 level before moving up in the ranks. His decision and future, however, will ultimately be affected by the outcome over next year's race calendar.

Asked if racing as a stagiaire during the end of 2020 was under consideration, Pidcock said: "Maybe that would be a good option but then again if I want to venture into mountain biking it might not work. With the Olympics next, now I think I've also got a good shot at getting a ride there too.

"We need to see when races start again. I was going to go for mountain bike Worlds, which has been postponed. Then I was going to aim for the road Worlds. I was looking forward to every race on my calendar this year, so it's a shame. I'm not sure how this affects things long term.

"I want to achieve everything that I can at the U23 level and last year I missed out on a lot of things for various reasons. I've got one year left of U23 racing, but I'm not sure about next year. With the whole situation and sponsors, things could be hard for cycling.

"Over the next few weeks I would have been in Belgium for the U23 Tour of Flanders and then the same version of Liege before racing the Tour de Yorkshire but now we're working off the fact that there might be some races in July.

"I'm getting into a good routine of training with two days of training and one day of taking it easy. I'm still going out, and we're still allowed to go out in Britain. I'm doing a bit of Zwifting and I'll be doing some races in the coming days. It's an easy way to keep some top-end form."

Join Cyclingnews as we live stream the event.

For more on Tom Pidcock, go to his athlete profile page on RedBull.com