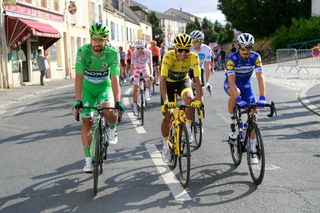 It may come as no surprise given his racing quality and star power, but Bora-Hansgrohe leader Peter Sagan is believed to be the highest-earning rider in pro cycling this season.

The Slovakian reportedly takes home €5 million (€4.47m) per season, though Cyclingnews has been informed that the real figure is still higher at €5.5m (£4.92m).

The figures come from a report by French newspaper L'Equipe, which published a list of the 20 highest earning riders in the world.

The list is dominated by Grand Tour stars, with 12 filling out the ranking and Astana's Miguel Ángel López taking the 20th place spot at a reported €1.5m (£1.34m).

Perhaps surprisingly, given the number of wins they bring in year-on-year, only two sprinters feature – Fernando Gaviria on €1.8m (£1.61m), Elia Viviani on €1.5m at his new team, Cofidis.

The 21-year-old isn't on L'Equipe's list but Cyclingnews understands that he's already taking home €2m a season after his stunning neo-pro season for UAE Team Emirates last year and agreeing a new contract with UAE Team Emirates that last until 2024. Last year Pogačar won the Tour of California and three stages of the Vuelta a España en route to third overall at his debut Grand Tour.

Read on for the full list, amended with the information gleaned by Cyclingnews.

The highest earning riders of 2020