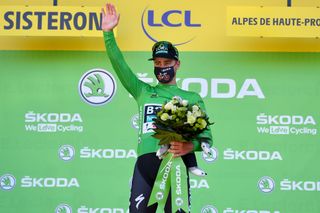 Peter Sagan in yet another green jersey, this time in Sisteron (Image credit: Bettini Photo)

Peter Sagan might have hit out far too early into the headwind in the Tour de France stage 3 bunch sprint in Sisteron on Monday, but the Bora-Hansgrohe rider could console himself by climbing onto the podium to get the green points jersey, awarded to leader of the points classification, for the 126th time in his career – including a record seven trips to the final podium as overall points classification winner in his career.

"It was a pretty messy sprint. In the final three or four kilometres of the stage, we had a terrible headwind and everybody was all over the place – riders were coming to the front then dropping back, it was messy," Sagan said after the stage finish in Sisteron.

"Thanks to Daniel's [Oss] lead-out work we were able to position ourselves well, but I think we launched the sprint too early and at about 150 metres from the finish I was overtaken from the right.

"Still, I'm happy for this green jersey. It's nice to wear it and I'll do my best to keep it all the way to Paris," the Slovakian sprinter said.

When Sagan promises he wants to keep the jersey all the way to Paris, it's a promise he has shown he can keep. Thanks to his consistency in the sprint finishes and his ability to get over smaller climbs with the front group, often going into breakaways as he did on stage 1 of this year's Tour, Sagan has proven to be unbeatable in the competition.

His 126-day tally in green doesn't even include days he's worn the jersey 'on hold' for the leader of the race who also led the points competition, as he has done during the past two days.

Sagan began his Tour de France sprint domination in 2012, in his first appearance in the race, taking the jersey from prologue winner Fabian Cancellara after winning stage 1. He won that year by a massive 141 points over André Greipel. He repeated in 2013 much the same way, winning only one stage but taking the green jersey from Marcel Kittel after stage 2 and holding it through to the end to beat Mark Cavendish for the points classification title by 97 points.

In 2014, Sagan wore the green jersey after every stage except the first, won by Kittel, and beat Alexander Kristoff by a massive 149 points without winning a single stage. He went winless again in 2015 and only led the points classification after 13 stages but still beat Greipel by 76 points.

Sagan got back to his winning ways in 2016, taking three stages and winning the points classification by an enormous margin – 242 points – over Kittel, although he traded the green jersey with Cavendish in the first week, taking it back after the race hit the high mountains.

The only time Sagan did not win the green jersey since his first Tour de France participation was when the race jury ejected him from the 2017 Tour de France after he clashed with and sparked a dramatic crash of Cavendish.

He came back in the 2018 Tour de France during which he passed the 100 days in green mark, won three stages and led the points classification after every stage but the first, won by Fernando Gaviria. Again, he won the overall by 231 points over Kristoff.

Last season, Sagan's dominance slipped ever so slightly with triple stage winner Caleb Ewan coming within 68 points of his total.

Ewan may yet change his mind about chasing the green jersey this season – after winning stage 3 – but before the race he said he didn't think the competition suited pure sprinters like him.

"The way the points work it's just not a competition that suits a pure sprinter," Ewan said. "We haven't seen a pure sprinter win in years. I think not just Sagan but also [Wout] Van Aert who can climb and sprint. The days I can't get to the finish, they'll get there and get maximum points. Even the days when I can win, they're always top five or top 10 and always scoring points."

Sagan was meant to be racing first at the Giro d'Italia this year, which might have given an edge in the points classification to one of his rivals, had races been held in their normal time slots. But with the COVID-19 pandemic shuffling the entire calendar and sorting it into three months of racing that could end at any moment, the Tour de France came first.

Sean Kelly, a former green jersey winner, told Cyclingnews that Sagan might find it hard winning the overall points classification this year given the mountainous route.

"When you look at the route this year for sprinters, and for Sagan it could be a difficult one," he said. "There aren't many chances, so we could even see someone from the GC up there competing for the green jersey."