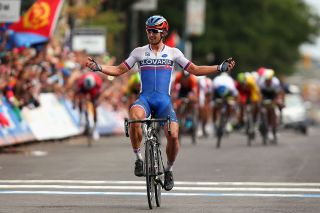 He has the prospect of history laid out before him, but Peter Sagan was true to his laid-back type on the eve of the World Championships elite men's road race.

Victory in Yorkshire on Sunday would give Sagan his fourth title – after Richmond in 2015, Doha in 2016, and Bergen in 2017 – and take him past Eddy Merckx, Alfredo Binda, Oscar Freire, Rik Van Steenbergen as the all-time record holder.

The three-year run came to an end in Innsbruck last year, but he has a big chance of returning to the rainbow jersey on Sunday, with the undulating Harrogate circuit seemingly well suited to his strengths.

"I miss the rainbow jersey," Sagan told Cyclingnews on Saturday, though he was reluctant to shoulder the burden of history.

"It would be something special, but I'm not thinking about that. There's no pressure. I'm confident but, you know, anything can happen in the race."

Worlds in motion: Sagan, Alaphilippe and Van Avermaet on the offensive at GP de Québec

While most of his rivals have been in Yorkshire since the middle or start of the week, Sagan only arrived on Friday evening, having preferred to stay at home in Monaco to train in good weather.

"I arrived yesterday at 6pm. I was racing last Saturday and Sunday, then I recovered for two days and then started to train," he said. "On Wednesday and Thursday I did long rides, and the last two days only easy rides."

Sagan's late arrival means he will be one of the few riders in the field who has not ridden the 14km Harrogate circuit in advance. With numerous corners, which could be complicated by rain, some riders have stressed the importance of knowing the contours intimately. That said, a lack of recon has hardly held Sagan back at Worlds in the past.

"I didn't do any recon. I had no time. I decided to be at home, as always," Sagan said in a press conference a little earlier. "It was the same before Doha and Bergen… Richmond was a bit different as it was in America. I don't think it changes anything

"Doing a recon in traffic and rain makes no sense, I don't think. There are seven laps. We'll see if the race is split already before the circuit, or if it's going to split on the circuit, but maybe I will have some opportunities to see the circuit."

Sagan never likes to say what he's expecting from a race, and he had even less reason to make projections having not studied the course.

"I am not afraid. What's going to happen will happen. Everyone already knows the rivals, the big names, and the big countries. They have to take the chance to control the race, we start like that, and I can just follow," he said.

"A big sprint is only one option. There are 100 scenarios tomorrow, but it's better to be in the moment and not think. You can design the whole race today then we don't have to race tomorrow."

One factor that will certainly influence proceedings is the weather, with heavy rain forecast throughout Sunday. The rain has already left its mark on these Worlds, drenching the U23 men's time trial, and causing several crashes. Sunday's course – particularly the Harrogate circuit – is technical, and slippy roads will make the corners treacherous.

"It's going to be a problem for somebody, for sure," Sagan said of the wet conditions. "For me, it's not my preferred weather but I can survive. It's the same for everyone. I'm not worried."

Sagan comes into these Worlds without the resounding run of performances of the sort that preceded his three titles. He was hit by a stomach virus in the early part of the season and was some way below his best in the Spring Classics. He won a stage and a record-breaking seventh green jersey at the Tour de France but has only won four races all season – his lowest haul since he turned pro back in 2010.

Following a post-Tour break, Sagan has returned to racing in the past month with five one-day outings, including the GP de Quebec and GP de Montreal in Canada – key pre-Worlds indicators. In Quebec he finished second behind Michael Matthews while in Montreal he placed 18th.

"I feel good and healthy," Sagan said, before being told he looked thinner than usual. "I don't know – I didn't use any scales," he said, to great laughter from sponsor and federation representatives at the back of the room.

"I did good preparation. I did the best I can do. Tomorrow we will see what happens. It's not always about how you feel – it's the result that counts."

Returning to the prospect of that fourth title, Sagan struck a familiar tone: "History for sure would be something special, but I'm trying to take it easy. It's not going to change for anybody. I think I'm still going to ride my bike."