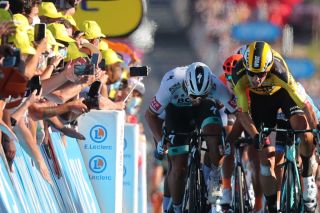 Peter Sagan (Bora-Hansgrohe) has defended the manoeuvre that saw him relegated from second place on stage 11 of the Tour de France, claiming that he moved from his line and into Wout van Aert's ribs only to avoid hitting an advertising bollard amid the barriers on the roadside.

The race jury relegated Sagan to the rear of the peloton after they deemed that he had barged van Aert with his shoulder in the closing metres of a stage won in a blanket finish by Caleb Ewan (Lotto Soudal).

The relegation is a severe blow to Sagan’s hopes of winning the points classification for an eighth time. As well as losing the points for finishing second on the stage, the Slovakian was also handed a 13-point penalty, which meant that he began stage 12 some 68 points off the green jersey of Sam Bennett (Deceuninck-QuickStep).

The Irishman extended his lead to 70 points at the intermediate sprint after 51km of stage 12.

“Yesterday could have been a good day but in the end, it was a so-so day, you know. I don’t know what to say,” Sagan told Eurosport at the start of stage 12 in Chauvigny.

The three-time world champion suggested that he had deviated from his line only to avoid clipping an advertising bollard that was protruding from the barriers.

“I did my line. I went from the back and I saw a little space there,” Sagan said.

“You know, I saw that the barriers were pretty close, but after the middle of the barriers there was something with branding, some pole there, going 90 degrees out. If I keep going like that for sure I am going to touch it with my handlebars, so I moved a little bit left. I didn’t think it was a dangerous move. I don’t think so.”

Sagan reiterated that explanation in an interview with ITV, where he insisted that he had not deliberately sought to block or impede Van Aert. The Belgian expressed his annoyance by raising his middle finger after finishing fourth (later upgraded to third) on the stage, and he was fined 200CHF for the gesture.

“I have to accept it [the commissaires’ decision],” Sagan said.

“I did my own sprint, I didn’t once make somehow to block somebody or something. I don’t think I did. I was fighting to survive myself.”

In a further interview with France Télévisions and RTBF, Sagan was asked about Van Aert’s reaction to the manoeuvre.

“After a finish like that, everybody can have an excessive reaction. It’s a question of emotions,” Sagan said. “I have experience of all that. He is young and strong, but he must also be a bit more relaxed.”

Van Aert laughed when asked by Sporza to respond to Sagan’s comments.

“I think I’d better not respond to that,” he said. “Of course, I reacted myself yesterday, but not in the right way. I freely admit that. Maybe that was not the right start to a conversation.”