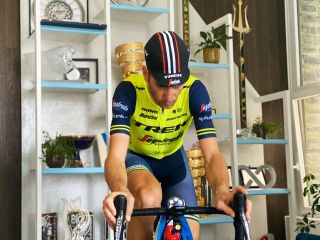 A number of current and former professionals joined Vincenzo Nibali (Trek-Segafredo) as the Italian rode the final 57km of Milan-San Remo online on Saturday. The project was put together by Garmin Edge and race organizers RCS and took place on the same day Milan-San Remo was due to take part.

The first Monument of the season and several more of RCS’ key races, including Tirreno-Adriatico and the Giro d’Italia have all been postponed due to the coronavirus pandemic.

The online ride – which was not officially billed as a race – saw 4,221 riders take on the final 57km of the race, including the Tre Capi, Cipressa and the Poggio. Nibali, who famously won the race in 2018 after a brave solo attack, was joined by last year’s Tour of Flanders winner, Alberto Bettiol (EF Pro Cycling), and a number of ex-pro riders.

“Milan –San Remo is a race that has a special place in my heart and one of my most beautiful victories,” Nibali said in a press release issued by his team, Trek-Segafredo.

“Today I had the opportunity to ride it in a new and very fun way. A nice initiative to pedal on the race route virtually while staying at home. I was able to cycle, albeit virtually, with my fans. And I want to ask them to be patient in this difficult moment, keep on staying home and ride indoors - we'll see them again on the roads at races soon!"

Several teams have created similar initiatives in recent weeks with Mitchelton-Scott leading the way with a number of rides and races set up on the Zwift platform. A number of riders from both the men’s and women’s teams have taken part in the events.

The surge in online riding comes as many countries across the globe enforce lockdowns and social distancing. In some countries riding outside is completely banned. On Saturday Daniel Martin urged everyone to do their part and stay inside.

On Friday evening Nibali gave a live interview on Facebook and made his feelings known with regards to how serious the pandemic had become. Italy has become the worst affected country in the world with over 4,000 deaths.

"I feel deeply for the victims of virus and all their families," Nibali said, expressing his sorrow for the many Italians who have lost their loved ones due to the spread of the Covid-19 virus.

"They often can’t say their last goodbyes to those who have died with the virus, and that's terrible. In a moment like this we can only try to stay strong and united and hope things improve.

"It's good to see that a lot of people have now understood how serious the virus problem is and are working hard to fight it," he said. "My message is get through with your family at home. We often rush around and live our lives on the edge; maybe this moment with family can help us live our lives differently in the future."