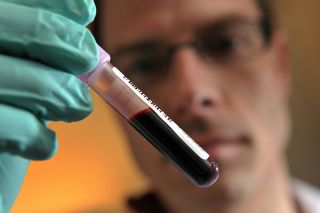 A blood sample is tested at the Lausanne Laboratory (Image credit: Getty Images)

German and Austrian police in charge of the Operation Aderlass anti-doping investigation have uncovered a new doping product, a synthetic blood substitute reportedly already used in the peloton despite not being available on the market.

The product, which has an effect on performance similar to that of EPO, is called 'H7379 Haemoglobin Human', and is a synthetic, powdered form of haemoglobin – the oxygen-transporting metalloprotein which makes up 95 per cent of human red blood cells.

According to Het Nieuwsblad, investigators have information that the product was used by riders to microdose during the 2016 and 2017 seasons. In August, the authorities arrested a Croatian who acted as supplier for the man at the centre of the scandal – ex-Gerolstener and Milram doctor Mark Schmidt. The supplier cooperated with investigators, revealing the existence of the product.

UCI to re-test samples from 2016, 2017 in light of Operation Aderlass information

The drug, produced in freeze-dried powder form by a subsidiary of German pharmaceutical and chemical giant Merck, boosts oxygen transfer around the body, similar to various methods used in cycling over the years, including EPO and blood transfusions.

Haemoglobin-based oxygen carriers (HBOCs) such as H7379 Haemoglobin Human – which are normally used as a blood subsitute in emergency clinical situations – have hit the news in the past. Lance Armstrong's spokesperson denied he would have had access to HemAssist, as a 2011 Sports Illustrated investigation alleged. Michael Rasmussen admitted to having used Hemopure in 2002, saying in 2017 that it was "useless" and "pure placebo".

Doping controls can detect HBOCs, though specific tests are required in order to detect them. Such testing which would only be used where there is already suspicion of HBOC use.

The investigation team have reportedly obtained names of riders who used the product and have passed information on them and the product along to the UCI and the Cycling Anti-Doping Foundation (CADF). In November 2019, the UCI announced that the CADF would carry out retests of samples taken during 2016 and 2017, now thought to be focussed on discovering traces of the drug.

No results from the retests have been announced, though the German-Austrian investigation team told Het Nieuwsblad that only 50 samples out of "thousands" have actually been tested.

When contacted by Cyclingnews, the CADF said: "The CADF is continuing to work on the reanalysis of samples in relation to Operation Aderlass. As this is ongoing, we will not comment any further at this stage."

The World Anti-Doping Agency (WADA) said: "We can confirm that 'H7379 Haemoglobin Human' is in fact powdered hemoglobin – which is indeed prohibited.

"We would note that ‘H7379’ appears to be simply the catalogue number from the company that sells/manufactures the product as a research reagent.

A number of professional cyclists were caught up in the investigation. Active pros Stefan Denifl, George Preidler and Kristijan Durasek were all banned for a period of four years, though Kristijan Koren got a two-year ban along with ex-pros Alessandro Petacchi and Borut Bozic. Danilo Hondo confessed to blood doping but has not been sanctioned.