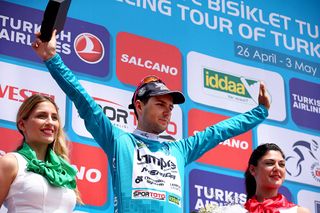 The UCI has announced that Croatian rider Kristijan Durasek has been banned for four years for "anti‐doping rule violations committed from 2016 to 2019 (use of prohibited methods/substances) based on information received from the law enforcement authorities of Austria."

Durasek turned professional with Lampre-Merida in 2013 after seven years on Croatian continental squads. He remained with the team through its transition to UAE Team Emirates.

Durasek was implicated in Operation Aderlass, an Austrian investigation that uncovered an illegal blood doping ring that involved a number of other athletes including nordic skiers and current or former professional cyclists Georg Preidler, Stefan Denifl, Kristijan Koren, Borut Bozic and Alessandro Petacchi.

News that the UCI had provisionally in May emerged while he was riding for UAE Team Emirates at the Tour of California. He immediately quit the race and returned home and has not raced since.

The UCI also gave two-year bans to Slovenians Kristijan Koren and Borut Bozic and disqualification for 2011 and 2012 and only 2012, respectively.

Operation Aderlass started at the Nordic Skiing World Championships in Seefeld, Austria, when authorities raided a hotel and reportedly caught one athlete being given a blood transfusion in his hotel.

The investigation extended to Erfurt, Germany, where police there uncovered an estimated 40 blood bags in a garage linked to former Milram doctor Mark Schmidt. Schmidt and four others were arrested in connection to the ring.

German authorities later confirmed that 21 athletes from five different sports and eight different countries were under investigation for blood doping.

Denifl, who signed for the CCC Team but quit his contract before the 2019 season started, had no warning signs in his passport according to CCC Team manager Jim Ochowicz.