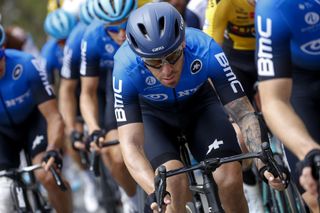 Last year, team manager Doug Ryder made the tough decision not to select Mark Cavendish as he recovered from Epstein-Barr syndrome. This year there is no place for Louis Meintjes or Ben King, while Victor Campenaerts will target the time trial stages at the Giro d'Italia in October.

"There are nine flat stages and three hilly stages, so at least 12 opportunities for our team out of the 21 days of racing. That's exactly what we're focusing on," team manager Doug Ryder said after the line-up was announced during a video presentation.

"With seven Tour de France stage wins in our five Tours and seven podiums, we definitely want to work hard and increase that and do the best we can with the blue train on those stages. There are four opportunities in the first week and an opportunity for the yellow jersey like in 2016. This is a special team for a special race and these are special riders."

Both Gibbons and Walscheid will make their Tour de France debuts while Boasson Hagen is riding his tenth Tour and his sixth for the South African team. He has won three stages over the years and is expected to target the breakaways in the second half of the race along with Valgren.

"It is one of the biggest dreams for any cyclist so to be able to do it once again is a privilege – I can’t wait. I like the pressure (of being a stage winner) but I think that the team is aiming for stages, which includes me of course, so hopefully we can work together towards that which would be really great," Boasson Hagen said.

That deal was extended until 2024 but it is still unclear if the sponsorship if the team will extend beyond the 2020 season.

Riis predicts a huge fight between Ineos and Jumbo-Visma

Bjarne Riis joined NTT Pro Cycling as a team manager in 2020, focusing on the sporting performance of the team. Riis had still to formally secure his 30 per cent ownership stake in the team in June but is seen as a key to turning around the team's results. He did not take part in the presentation of the Tour de France squad but helped select the team and is expected to be in Nice for the start of the race on August 29.

Riis won the 1996 Tour de France ahead of Telekom teammate Jan Ullrich and Festina's Richard Virenque, but the Dane admitted in 2007 that he had doped for a large part of his career, including during the 1996 Tour. He managed the successful CSC, Saxo Bank and Tinkoff teams and has always denied that he knew of and encouraged doping during his time as a team manager, despite direct allegations from former riders Tyler Hamilton, Jörg Jaksche and Michael Rasmussen.

He returned to WorldTour level with NTT after a four-year absence spent trying to build a new team structure funded by other cycling activities.

"I’m excited to be back at the Tour again, it’s been a while, too long I would say but I’m excited to see if we can deliver some nice results for the team," Riis said.

It’s very exciting (to select the team) but also a tough job, it’s tough to select and especially for those that miss out. But that’s what it is, and it’s a part of the job.

"It’s obvious when you look at our roster that we’re going for stages, that’s going to be our main focus. And then our only guy can be Pozzovivo (in the GC), I know that Roman was 16th last year but we have to see as many things can happen ahead of the race. But from the start we won’t have a big focus on the GC but rather for stages, and all kinds of them as we have a team that can feature on the sprints, massif sprints, the middle stages and hopefully also some mountain stages."

Riis observed the recent battles between Team Ineos and Jumbo-Visma at the Criterium du Dauphine and predicted the hard racing could take its toll. He wants the NTT team to be ready to take advantage.

"Everything is up for grabs in this race. Dauphiné was very, very hard and some will pay for that, and some will come out better," Riis said.

"There is a huge fight between Jumbo-Visma and Ineos – absolutely – but it’s going to be interesting. Many riders went very deep and will pay for that in the coming days but that’s for them to decide. What’s important is that we take care of our team, do the right things and race intelligently at the Tour - because for a team like ours that’s important - and somehow save a little bit for the last week because I believe that week will be very difficult. Many will suffer and hopefully we can save something for that."