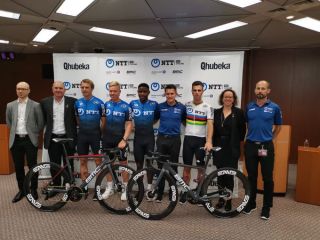 NTT Pro Cycling were one of several WorldTour squads to enact salary cuts during the coronavirus lockdown, but owner Doug Ryder has expressed optimism about the team’s future ahead of the planned resumption of the WorldTour calendar next month.

In April, Ryder acknowledged that 2020 was a “decisive year” for NTT Pro Cycling and said that it was “critical” that the postponed Tour de France took place. The Tour is currently slated to get underway on August 29, while on Sunday afternoon, Ryder’s NTT squad secured overall victory in the virtual version of the race on the Zwift platform.

“We are very positive about our future. We are having meetings all the time with our sponsors, and things are looking really good,” Ryder told reporters after the final stage of the Virtual Tour de France, citing “similarities and synergies” with partners NTT, BMC and Alcatel.

“We’re looking forward to building a strong team for 2021 and beyond, and we look forward to getting those agreements signed off in the coming weeks just before racing starts. We are very courteous to our partners at this time, of course, because they are also looking at their own businesses, but we’re looking in a good way with our partners to have a good future together in 2021, for sure, and in 2022.”

In January, Ryder reached an agreement with Bjarne Riis that saw the Dane come on board as team manager and co-owner of NTT Pro Cycling. Last month, however, Riis confirmed that he and business partners Lars Seier Christensen and Jan Bech Andersen had not yet finalised their purchase of a 30 percent stake in the team, though he said it was “still the intention” to do so.

“They wound up their own business [Virtu Cycling – ed.] so things just take time, but at this point in time, Bjarne Riis is our team manager and Lars Michaelsen is our lead sports director,” Ryder said. “We’re really working well together, and we look forward to showing that when the team gets together on the road in the next few weeks. Things are all on track.”

On Sunday, both Ryder and Riis could be seen in the background encouraging Ryan Gibbons, Edvald Boasson Hagen, Max Walscheid and Rasmus Tiller as they participated in the final stage of the Virtual Tour de France from NTT’s training camp in Lucca.

“We’re all together here in Tuscany at the training camp after not being together for four months,” Ryder said. “I think we are in good space at the moment from a mental, physical and preparation point of view. We used that time over the last few months to work on our weaknesses and to look at every single rider as an individual, so when the racing season starts we can be a better and more connected team and do good things – because we do need to have a good season this year.”

NTT Pro Cycling claimed six victories – including two at WorldTour level courtesy of Giacomo Nizzolo – in early 2020 before the season was interrupted in March by the COVID-19 pandemic. The South African squad is set to resume competition at the Vuelta a Burgos on July 28, and Ryder was hopeful that the revised and condensed Autumn calendar – including the three Grand Tours and five Monuments – would proceed as planned.

“I think cycling has never been so united, from teams to race organisers to the governing body of world cycling. Everybody is unbelievably committed to each other to make sure we get on the road and race our bikes,” Ryder said. “Formula 1 was in the same boat and they’ve done the best they can, and I think cycling is going to do the same even if our racing circuit is on the open road.

“Let’s just hope that nothing happens and we can enjoy our second part of the season.”