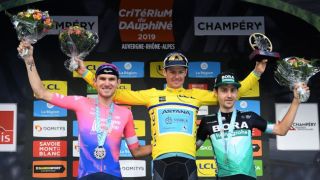 There will be no time trial in the 2020 Critérium du Dauphiné for the first time in the history of the race, with the French stage race maintaining its traditional character with a series of demanding Alpine stages.

The route of the 2020 edition was unveiled in Lyon on Monday, with organiser ASO heralding the race as "a true festival of altitude".

The Dauphiné couches itself as a key preparation race for the Tour de France and, as per recent tradition, the route includes some roads that the peloton will later face in La Grande Boucle in the white heat of July.

Due to the effect of the Tokyo 2020 Olympics on the cycling calendar, the Dauphiné starts a week earlier than normal, and its opening day will coincide with the final stage of the Giro d’Italia. The 2020 Dauphiné takes place from May 31-June 7, thus maintaining its traditional three-week gap to the Grand Départ in Nice on June 27.

The Dauphiné gets underway with a 197km opening stage from Clermont-Ferrand to Lyon that closely resembles the route of stage 14 of the Tour. Another hilly day in the Massif Central follows on stage 2, with the summit of the category 4 Col de la Gachet (3.3km at 4.6 per cent) coming just a kilometre from the finish line in Saint-Christo-en-Jarez.

Stage 3 from Saint-Chamond to Saint-Vallier includes the short but steep Côte du Montrebut (1.3km at 12 per cent) in the finale, which offers an obvious springboard for late attackers – shades, perhaps, of the Côte de Mutigny, where Julian Alaphilippe attacked to take the maillot jaune in Epernay at the 2019 Tour de France.

The sprinters should enjoy a more straightforward shot at victory in the Rhône Valley on stage 4, with a flat and fast run-in to the finish in Bourg-de-Péage.

That will be but a temporary respite, however, as the second half of the Critérium du Dauphiné takes place in the high mountains, starting with stage 5 from Vienne to the Col de Porte. At just 132km in length, the stage promises to be explosive, as the peloton tackles the Côte de Virville, the Côte de Roybon and the tough Côte Maillet (6.2km at 8 per cent) before the summit finish on the hors-catêgorie Col de Porte (17.5km at 6.2 per cent).

There is an opportunity for some Tour de France route reconnaissance the next day, as the race scales the Col de la Madeleine (which features on stage 17 of the Tour) ahead of another summit finish, this time on the category 1 Montée de Saint-Martin-de-Belleville (14.8km at 6 per cent).

The Dauphiné concludes with a brace of weekend stages based around Megève, in something of a mirror of the closing weekend of the 1998 edition of the Dauphiné, won by the late Armand De Las Cuevas.

The penultimate stage has some seven climbs crammed into just 156km. The stage begins with a troika of category 1 ascents – the Col de l’Epine, the Col de Plan Bois and Col de la Croix Fry – while the hors-catégorie Montée de Bisanne (12.4km at 8,2  per cent) serves as a brutal preamble to the finishing category 2 climb to Megève (7.4km at 4.7 per cent).

The race concludes with similarly exacting leg, as stage 8 includes no fewer than eight climbs, including two ascents of the Côte de Domancy, which served as the centrepiece of the 1980 World Championships circuit in Sallanches, where Bernard Hinault soloed to victory.

The hors-catégorie Col de Romme (8.8km at 8.5 per cent) is included early in the stage, while the climb towards the altiport in Megève should provide a dramatic denouement to the week’s action.

Race director Bernard Thévenet, a two-time winner of both the Tour and the Dauphiné, outlined the difficulty of the final weekend.

"The altiport is spectacular and we can use two different approaches on that final climb," Thévenet said, according to L’Équipe.

"The stage on Saturday will be the one, I think, where the bigger differences will be made. But on the last day, the GC leader’s teammates will have work to do. There are a lot of climbs and steep gradients. There’s almost 8,000 metres of climbing in two days. The winner will be a climber capable of recovering well."

Cyclingnews will have live updates and full coverage of the 2020 Critérium du Dauphiné in June.