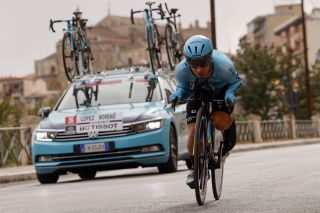 Miguel Ángel López’s Giro d’Italia came to a premature end when he crashed heavily during the opening time trial in Palermo. He lost control of his bike in the closing part of the stage after appearing to hit a bump in the road and he crashed into the barriers at the roadside.

The Astana rider was taken to hospital in Palermo, where it was established that he suffered no fractures, though he underwent surgery to repair a wound close to his iliac artery.

“The X-ray has shown no fractures, he suffered a deep wound very close to the iliac arteria, which he had a surgery to repair and which will heal in the upcoming weeks,” said Astana doctor Serge Niamke.

“Regarding this crash Miguel Angel hasn’t sustained any further serious injuries. He was able to leave the hospital on foot and returned back to the team's hotel. We will see how he is feeling tomorrow about returning back home.”

López was drafted into Astana’s Giro team after placing sixth overall at the Tour de France, where he also won a stage atop the Col de la Loze in the final week. The Colombian had looked set for a podium place at that point, but he dropped from third to sixth in the final time trial.

After the Tour, Astana manger Alexandre Vinokourov suggested that López would not remain with the team in 2021. In the team’s pre-Giro press conference, however, López insisted that a final decision on his future with Astana had not yet been taken.

López was due to ride the Giro in support of Jakob Fulgsang and Aleksandr Vlasov, who each conceded ground in the largely downhill 15.1km time trial from Monreale to Palermo on Saturday. Vlasov finished 54th at 1:20 behind winner Filippo Ganna (Ineos Grenadiers), while Fulgsang came in 100th at 1:47 back. The Dane lost 1:24 to Geraint Thomas (Ineos Grenadiers).

Fuglsang described the stage as “a day to forget.” Like the other late starters, his effort was hampered by an unfavourable wind. “The stage was tough and the wind made it even harder but also dangerous.”