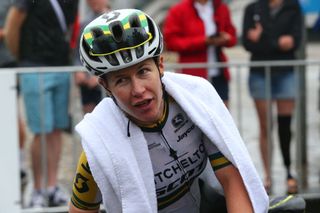 Amanda Spratt (Mitchelton-Scott) has her focus fully dialled in on the new-look women’s WorldTour and the Australian is also targeting the gold medal at the UCI Road World Championships later this year.

The 32-year-old returns to racing later this month but it’s the bulk of the women’s WorldTour races in September and August, as well as the climber-friendly Worlds, that form the bedrock of her year.

The last few months have felt like a lifetime, with global lockdowns, a pandemic, and restrictions on our daily lives imposed upon us. For professional cyclists, the main challenge has been to remain focused even when races were postponed and teams put on uncertain financial footings.

Spratt on new calendar: Giro Rosa could be good preparation for Worlds

Spratt has managed to keep off-the-bike distractions to a minimum. That in itself is quite a feat considering that, until recently, the future at Mitchelton-Scott looked anything but secure. A botched takeover from the Manuela Fundación, pushed the team owner Gerry Ryan to change the management structure of the team and step in financially to guarantee the security of the squad for the next two years at least.

“It wasn’t really a distraction,” Spratt told Cyclingnews regarding the Manuela Fundación episode.

“Since we’ve had the lockdown the team has been great with communicating and looking out for the staff and the riders. We’ve had the stuff with Manuela and then the restructuring of the team, but the team has been incredible in updating us with accurate information. It’s easy to read everything out there and draw your own conclusions but at any time we could pick up the phone and find out what was really happening and that’s really helped.

“In general, as athletes, we’re used to putting other things aside and just focusing on what the job is. So I didn’t let myself stress and I just focused on my training.”

Gerry Ryan has played a pivotal role in the development and success within Australian cycling for several decades, and Spratt acknowledged that his commitment had been vital, especially during this recent period of uncertainty.

“It’s amazing, his commitment. He’s been involved in Australian cycling for several years and especially with more of a focus on GreenEdge over the last few years. I’m eternally grateful for his support and I wouldn’t be in the position I am now without his support,” Spratt said.

“We had a men’s and women’s team right from the start and he’s always had that commitment to women’s cycling, right from the start. We owe a lot thanks to his passion and support. You always want to get a good result and when you cross the line, you’re thinking about those who have helped you, from those in the team to your teammates and family. Gerry is included in that because we wouldn’t be here without him.”

Spratt, who hasn’t raced since taking third in the Cadel Evans Great Ocean Road Race back in January, will fine-tune her form with a string of races at the end of July before commencing with WorldTour duties at Strade Bianche at the start of August. There is then a lull in women’s WorldTour races until the autumn, but events come thick and fast from that point onwards.

“I’m excited to come back.  It’s going to feel strange but normal at the same time because it’s almost six months between races for me, and even longer for some, but mostly I’m excited to be back with the team,” Spratt told Cyclingnews.

“No one has had this sort of preparation before in what is effectively the start of the season. I know that my form will be good, and I’ve trained really hard for racing. It’s also interesting with our calendar because Strade Bianche is our first WorldTour race but then there’s a huge break before the rest of  the WorldTour races, so it will be really interesting to see who really goes hard for the first races and who holds back for September and October when we do have race after race.”

With so many races coming back-to-back and little in the way of precedent to rely on, teams and riders go into the new-look season with a sense of the unknown hanging over them. For Spratt, however, having clear and defined goals is key to any possible success, because holding top-end form for three months is too much of a challenge.

And it’s the World Championships that hold the main focus in Spratt’s season. There had been speculation suggesting that the UCI’s marquee event could be moved to the flatlands of the Middle East due to potential COVID-19 restrictions, but the governing body and the local authorities in Switzerland have since given the Championships a provisional green light.  It’s great news for Spratt, who thrives in the mountains and already has a silver and bronze from previous World Championships.

“As I said, I don’t try and read too much media, but I did read about the possibility of the Worlds moving to the Middle East. I did have a bit of panic but it’s great to see that they’re going ahead in Switzerland. I’ve seen and ridden course and I think that it’s a great opportunity for the Australian team to get results. I’m really focused on that race,” Spratt said.

“I went there last year, twice even, and rode a couple of laps of the course. We have a DS who lives on the course and I feel like I’m getting to know it quite well. Hopefully, by race day I’ll know it like the back of my hand.”

If Spratt is going to conquer in Switzerland and come away with Australia’s maiden rainbow jersey in the elite women’s road race then she will need to beat the toughest challenge – not the course, but the almighty Dutch who have won five of the last eight championships.

“The Dutch have won most of the last World Championships, with the exception of Qatar. They’re the nation to beat but I’ve looked at the course, and I know the demands. I’m not focused on what they’re doing though and I’m just concentrating on getting into the best shape that I can. I know that it’s a course that I can do really well on and that the climbing is crazy hard.”