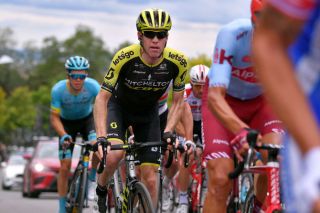 The life of the professional cyclist can be a lonely one at the best of times, but the trade has rarely felt more solitary than it does now, against the backdrop of the coronavirus pandemic. All racing is suspended for the foreseeable future and riders are compelled to train alone, in most cases on turbo trainers in the privacy of their own homes.

Despite their enforced seclusion, Brent Bookwalter maintains that he and his peers must strive to be united during the ongoing hiatus if they are to succeed in having their concerns dealt with during this period of uncertainty.

“In a perfect world, we would have a riders’ union that was equipped and poised to step in at a time like this. If there was ever a time when we need them, this is going to be it,” Bookwalter told Cyclingnews.

Spekenbrink: For the Tour to be run, it must be safe

UCI announces suspension of all races 'until at least April 3'

“In the whole of my career, there’s never been a moment when we’ve needed a strong and united riders’ union more than now. That association has made some progress over the course of my career but we’re the smallest fish in the ocean for sure. Our conditions and our circumstances get dictated by the other powers more than anything. We don’t have a whole lot of leverage.”

The professional riders’ association, the CPA, was among the stakeholders invited to participate in an emergency teleconference organised by the UCI last week, but Bookwalter, a director of its North American branch, the ANAPRC, is aware that the concerns of riders struggle to be heard over those of the governing body, race organisers and teams.

“I think as a riders’ association, we’re somewhat respected, but not to the level that the other stakeholders are,” Bookwalter said. “We’re the ones in the room with the least resources in terms of what we put into our association. The race organisers, teams and governing bodies have a much more stacked roster than we do in terms of experts and professionals in business, law and marketing. It’s challenging, but I’m still optimistic and hopeful we can still make our best interests be heard and have them factored in.”

Bookwalter praised his own team, Mitchelton-Scott, for acting swiftly to protect its riders’ health by withdrawing from racing in early March, once the coronavirus pandemic began to spread in Europe and even though Tour de France organiser ASO pressed ahead with Paris-Nice.

“It does come at a price to our sponsors and potentially to the relationship our team has with races – and even to us as riders, especially those of us who are on a contract year. You want every chance to prove yourself, you don’t want to give those up,” Bookwalter said. “But in the big picture, looking at what was the best for our health and at how this thing has tracked, it was the socially and culturally responsible thing to do.”

When the coronavirus pandemic first began to tear up the cycling calendar, attention focused on the races that fell by the wayside and the health risks posed by those that went ahead. Now, however, the economic impact of the hiatus is beginning to make itself felt, with Astana and Lotto Soudal among the first WorldTour teams to enact pay cuts. More will surely follow, particularly as concerns grow that the Tour de France itself will join the litany of marquee events to be postponed or cancelled as the world grapples to slow the spread of Covid-19.

The UCI last week outlined a contingency plan to extend the season by two weeks and reschedule the Giro d’Italia and Spring Classics in the Autumn. While Bookwalter believes that riders would be willing to race deeper into the year and with fewer breaks if it meant salvaging something from the year, there are limits to how late the season can run.

“Shortening the races is a potential solution, extending the season is a potential part of a solution as well, but I will say there are other complications that come along with that,” Bookwalter said. “As things stands now, most teams are already on the limit in November and December just getting ready for the following season, so something’s got to give there.”

A late-running season will also leave out-of-contract riders in an ever more precarious state, particularly if teams find themselves operating on severely reduced budgets for 2021. Even in times of relative plenty, the cycling transfer window’s lack of an end date gives all the leverage to the employers, who can bank on desperate riders signing for below market as the season ends. That situation will only be exacerbated this winter.

“Guys in contract year are going to really get strung along late, and that will put the power with the teams even more,” Bookwalter said. “Guys will be waiting, waiting, waiting and will most likely get desperate and take whatever they can get. And that will change the dynamic as well.”

In a time of pandemic, of course, everybody has more immediate and pressing concerns closer to home, and Bookwalter was faced with the dilemma of whether he and his family should isolate themselves in his European base of Girona or at home in Asheville, North Carolina.

Bookwalter and his wife Jamie’s affiliation with Girona is such that they remained there for the birth of their first child, Waylon, at the beginning of February, but when restrictions were placed on travel between Europe and the United States, they opted to return home to be closer to a support network of family and friends. “We put our new lives as parents top of the priority list,” he said.

It meant a frantic trans-Atlantic trip via Barcelona and Amsterdam a little over a week ago, and they began a 14-day period of self-quarantine on reaching North Carolina, facilitated by friends who stocked the house with food ahead of their arrival. “There’s a chance that Europe will process recovery sooner because things hit there first, so it’s definitely realistic that I could be sort of stuck in the US while the races get going again in Europe,” Bookwalter said. “But there are other priorities too, so we just tried to do the best we could.”

After a complicated 2019 campaign, Bookwalter began the new season on an upbeat note with a fine showing in support of Jack Haig at the Ruta del Sol, but that has been his only competitive action of the year thus far. Like everybody else in the peloton, he now finds himself in the ambiguous position of training for races at a wholly unknown point in the future.

“It’s easier to stay ready than to get ready,” Bookwalter said, even if he is aware that a return to racing is still months away. For now, the work is being done aboard his turbo trainer, with his Mitchelton-Scott team promoting rides with their fanbase on Zwift both as a marketing and motivational tool.

“I’d have to say under normal conditions I don’t like riding indoors at all,” Bookwalter said. “But if ever there was a time for it, this was it.”