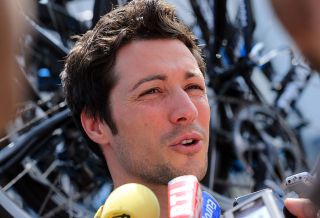 The funeral of Nicolas Portal funeral will take place Monday, March 9, with hundreds of people expected to attend the religious ceremony in the Auch cathedral near Toulouse in the south of France. He will then be buried in Auch. He is survive by his wife Magalie and two young children.

Portal died on Tuesday after suffering a heart attack at his home in Andorra. The likeable Team Ineos directeur sportif was just 40 years old and his sudden passing sparked a huge outpouring of emotion.

"He was with me through the hard times, picking me up any time I doubted myself, and right by my side encouraging me to every success," Chris Froome wrote in a moving message on Instagram.

"He has left a truly phenomenal legacy. I will ride in his memory and do all I can to honour him and all that he taught me."

Geraint Thomas wrote, "Nico was so talented, warm, genuine and always there when I needed him. He was more than my colleague, he was my friend.

"My thoughts are with his wife and children, who he put above everything else. I’ll always remember him dancing with his little girl in Paris in to the early hours. He was too young to be taken away from them. Nico, I’ll miss you mate, you were one of the good ones."

Tao Geoghegan Hart explained why Portal was so well liked.

Team Ineos has decided not to race until March 23 due to Portal's death and the ongoing coronavirus situation. Many riders and staff from the team are expected to attend the funeral on Monday.

"We have taken this decision given the unique set of circumstances we are facing," Team Ineos manager Dave Brailsford said. "This is a uniquely sad moment for everyone at the Team. We have lost someone we all loved very much and are all grieving for Nico.

Brailsford said the team was thankful for all the messages of condolence received in the wake of the Frenchman's death.

"I would like to thank everyone for their messages following the tragic news. They have really meant a lot to us all as we try to come to terms with this terrible news. Nico meant the world to us as a team and it is genuinely touching to know how much he also meant to everyone else across the sport."