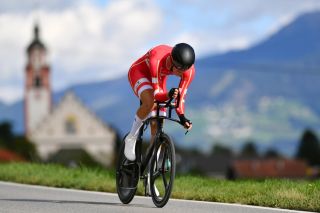 The 22-year-old Movistar neo-pro Mathias Norsgaard has suffered a double fracture of the tibia after being hit by a car while training in Girona. He faces surgery in either Spain or Denmark and will be out of action for six months before being able to race for the first time in Movistar colours.

The young Dane won the opening stage of this year's Tour de L'Avenir and finished fourth in the under-23 World Championship time trial in Yorkshire. He is part of a new generation of young riders signed by Movistar as the Spanish team rebuilds for the future after losing Nairo Quintana and Mikel Landa.

In recent weeks Domenico Pozzovivo, Letizia Paternoster, Vittoria Bussi and junior rider Andrea Ostolani have all been hit by cars in Italy, while Alessandro De Marchi vented his anger on social media after yet another close pass.

Letizia Paternoster hit by car while training in Italy

Gesbert struck by car while training

"It's awful. I'm here in the hospital and I've really hurt myself," Danish TV2 television reported Norsgaard as saying.

"My preparations were going really well and I was looking forward to getting started. Now it's all been ruined. Fortunately, I have a two-year contract with Movistar but breaking my leg is the worst possible start I could have."

Norsgaard explained that a car cut across him to enter a car park as he ended his ride in Girona. The impact with a lamp post caused the double fracture in his lower leg.

"I couldn't do anything. I drove into the car and flew into a lamp post," he explained.

"Had I not hit the lamp post, the big injuries may not have happened because I did not even have a scratch on my body. I hit the lamp post directly with the tibia. I just lay in a puddle and couldn't move. It was as if my foot was not moving when I tried to move it."

Norsgaard was taken to a local hospital but is due to be transferred to a private hospital or a flown home to Denmark to undergo surgery.