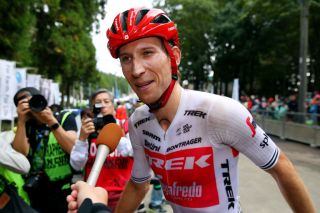 Bauke Mollema has hailed the 2019 season as his best ever as he looks ahead to a 2020 campaign packed with targets, ranging from a number of one-day races to the Tour de France.

The Dutchman, beginning his sixth season with Trek-Segafredo, finished a career-best fifth at the Giro d'Italia last year, going on to take gold in the mixed relay TTT at both the European and World Championships, before rounding off his year with a Monument victory at Il Lombardia.

"It's motivating to finish the season at a high level," Mollema told Cyclingnews at Trek-Segafredo's December training camp in Sicily.

"It gives more confidence for the winter and I felt that, when I restarted the training after a month, it was coming back quite easy. In cycling, or maybe in life, you always want more, and you look at next year and want to win a big race again.

Trek-Segafredo tick off Giro d'Italia goals through Mollema and Ciccone

"I was really happy with the Giro. It was one of the best Grand Tours that I did. I performed at a really high level there. At the Tour I was not so good. In the beginning I was feeling really good, but then at one point in the last 10 days after the TT it was just over, and I was empty.

"Lombardia is my biggest victory, for sure," he continued. "If you compare to the other victories I had, the Tour de France stage was nice as well - a big win - but this is a Monument and when you see the reactions, I really have a feeling that it counts even more to win one of the five big one-day races."

Mollema credited a number of factors for his big year, with a different diet, changes to his bike, and freedom from the team all benefitting the 33-year-old. A superb run of form from September to October saw him take gold alongside Riejanne Markus, Amy Pieters, Lucinda Brand, Jos Van Emden and Koen Bouwman in Yorkshire before heading to Italy for the autumn Classics.

There, he finished fourth at the Giro dell'Emilia, fifth at GP Bruno Beghelli and seventh at Milano-Torino before winning Il Lombardia with an 18km solo attack and also triumphing at the season-closing Japan Cup. Mollema said that six weeks away from racing in August played a key part in his late season run.

"I'm really happy that I have some freedom here, that I can discuss with the team what I can focus on," he said. "I think it's also important that the team saw I was a bit tired at the end of the Tour. It was important for the body and the mind to take a break and get ready.

"That was really nice. I could really recover and train hard again. I did a really good training block that really gave me a boost for the last month of the season. They know me by now, that when I'm at home I train as hard as when I'm with the team, so it's nice to get that confidence.

"I think I made some small steps. We changed some things on the bike like a new, wider saddle and different handlebars and I think that made me feel more balanced on the bike. For years I was focussing on the details but last year I changed my nutrition a bit. It was nothing crazy but more fibre and more organic food. I felt I had more energy and maybe that's why I was consistent throughout the year."

Mollema also recognised his own growth as a professional during his 12-year career and said that he feels like his best might still be ahead of him. He didn't commit to a cycling career until relatively late – after his first year studying economics at university – and that might just be the reason why he still feels like he's progressing in the sport, he said.

"I don't feel old, actually. I've spent quite long in cycling, but I have the feeling that I just started a few years ago. I think I can continue for many years. Last year I had the best year of my career and hopefully I have the best to come.

"I started late with cycling and the first years I was learning, slowly understanding everything and when I was 20 or 21 I was not living for the sport as much as I do now. I progressed and it's also motivating that I'm still making steps at this age."

For 2020, there'll be a similar focus as in the past, though the abundance of tough one-day races has Mollema excited about his prospects for the upcoming season.

The Olympic Games and both European and World Championships, held in Tokyo, Trento and Switzerland respectively, feature tough courses well suited to climbers and puncheurs. For a rider like Mollema – who counts three podiums plus a win at Clásica San Sebastián, plus numerous top 10s across the Ardennes Classics and that win at Il Lombardia on his palmarès – there's ample opportunity to get a big result.

"This year I would say that I'll focus more on the one-day races because they went so well last year. Not only at Lombardia and the Italian Classics, but also in the Ardennes," he said. "I felt really strong in the one-day races and I want to focus more on that – the Ardennes and especially the Olympics, Worlds and Europeans. They're all on really hard courses and it would really be a dream to win one of them.

"I always watched the Olympics since I was really young, so the gold medal is even bigger than the World Championships for me. Not everyone agrees because you have the rainbow jersey, but still it's something huge for me, and so I really want to be there and go for a result."

Mollema will be one of a number of riders heading to the Tour de France next summer, with the race ending just a week before the road race in Tokyo. Targeting both is a tough balance to strike, with new teammate Vincenzo Nibali and Simon Yates among those racing the Giro instead.

The challenging Tour course, which features climbing from the first days, appeals to Mollema, but he questioned why the Olympics road race had to be held so soon after the Tour finale in Paris. Back in 2016, of course, there was a two-week gap between the two races.

"Last week I was looking through the course again, planning which stages to recon. There are some stages that I don't know. It's not like the Tour to have really hard mountain stages on the second day, fourth day, the Pyrenees, the eighth stage again," he said.

"It's super hard in the beginning and in the last week it's crazy hard. It will be an interesting Tour. You have to be good from the start; you don't have time to get into your rhythm. You already have to fight and suffer so much in the first week and in the last week there will be guys getting very tired.

"I don't understand why they placed the Olympics so close after. I don't know that the UCI has an influence in that, but they last three or four weeks so why not have it at least one or even two weeks later? It's a bit annoying but for most riders it's the same and we just have to go directly from Paris to Tokyo."

Mollema's Olympic participation isn't yet set in stone, but he feels his strong one-day performances mean he'll be in the five-man Dutch squad in Tokyo. Jumbo-Visma's Tom Dumoulin should join him, too, and there'll likely be an unexpected teammate on the start line too.

One quirk of Olympics selection rules means that teams can game their way to an extra track rider by including one in the road race team, like Germany did with Maximilian Levy in Rio, and that looks to be the plan for the Dutch, too, leaving in reality a four-man squad to support Mollema's medal ambitions.

"I think I earned my place last year in the one-day races. We have Tom Dumoulin too, of course. He will normally do the time trial and road race. Then we have some other climbers and I think we'll have a really strong team.

"They were discussing an extra guy for the track for the team sprint and team pursuit, like Jan Willem van Schip. He'll maybe be the fifth guy for the road, so it looks like maybe only four riders. It's not official, though."

With Mollema feeling at his best heading into 2020, there's a feeling that his team might also be at its best, too. Four-time Grand Tour winner Vincenzo Nibali has joined, as has climbing domestique Kenny Elissonde, while Giro d'Italia mountain classification winner Giulio Ciccone enters his second year in the WorldTour.

Mollema will be joined by Richie Porte at the Tour de France, where he expects a two-pronged GC attack. Meanwhile, Nibali will join him at a selection of races, too. With three GC men on board, he said that he hopes Trek can take the fight to the likes of Ineos and Jumbo in 2020.

"We have more guys to play and we can also target the GC in more races too. In Nibali we've added a big leader who can win Grand Tours and one-day races. For the team, that's really important.

"I'm not sure we'll race together a lot – it looks like we'll do the Vuelta and Liège and start at the Volta ao Algarve together. It's not final yet but it'll be nice to race together. I can help him in some races and maybe he can do the same in some finales.

"You see Ineos nowadays, always in the Tour with two or three guys in the first 10 or even on the podium, and Jumbo-Visma have a strong team with several leaders as well, so I hope that we can fight with those teams this year. I'm really looking forward to fighting for the GC at the Tour. I have the feeling that my best years are still ahead."