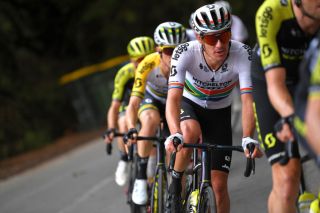 Daryl Impey (Mitchelton-Scott) at the 2020 Tour Down Under (Image credit: Getty Images Sport)

"This year has not been a normal one by any stretch of the imagination but the team is focused and ready for the challenge," senior directeur sportif Matt White said after the line-up was announced.

"We are very happy with the mix of experience and talent we have available for this year's race. This is a very complete group across all terrains. Last year was an incredible race for the team and we will continue in the same vein of targeting stage wins throughout.

"One thing for sure is we won't be leaving France without giving our all and making our fans and sponsors proud of the way we take on the world."


The Australian team has suffered a difficult 2020 due to the financial effects of the COVID-19 pandemic. The team's future looked unclear earlier after botched talks with the Spanish-based Manuela Foundación about a possible takeover. Severe pay cuts were made and then negotiations with Manuela Foundación fell apart in public sparking an overhaul in the team management.

Team owner Gerry Ryan eventually stepped in and announced that he would continue to fund the team for the next two years and restore riders and staff pay to their original level from August. That continuity and stability was key to keeping Simon Yates onboard for a further two seasons. However Adam Yates is expected to change teams for 2021 and he revealed during the Criterium du Dauphine that he had suffered with ‘persistent gastroenteritis’, forcing him and Mitchelton-Scott to pass on hopes of a good overall classification result.

"A stage win for the team would definitely make it successful and I would love to be the one who does it, personally that would be great. Last year was hugely successful and will be difficult to repeat, but we will certainly be going all out to achieve that," he said.

"Being a stage winner does bring a certain calmness for me. I was always hunting this and was sometimes over excited which ruined my chances. I can certainly think more clearly now without having to think ‘what if this is my only chance’. Having won at that level and from a break of many specialists on that day gives me confidence in the sense that I know I can do it."

Mitchelton-Scott for the Tour de France