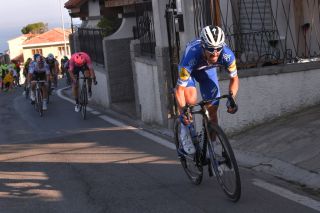 Deceuninck-QuickStep’s Julian Alaphilippe attacks on the climb of the Poggio at the 2019 Milan-San Remo. The Frenchman would eventually win the Italian Monument in a reduced-bunch sprint (Image credit: Getty Images Sport)

The ongoing debate about rescheduled calendar slots for cycling's most important races, forced by the coronavirus pandemic, could be resolved on Friday. Milan-San Remo, in particular, which was originally rescheduled for August 8, has been subject to various possible date options, with August 22 and August 15 both having been proposed as possible alternatives for the race, but La Classicissima – which normally takes place in March – may now be held on August 8 after all.

Race organisers RCS Sport had requested that Milan-San Remo be moved to August 22 – a week before the start of the rescheduled Tour de France. A number of professional teams supported the later date because it would have meant only a one-hour drive from San Remo to the Tour de France Grand Départ in Nice, reducing travel time and distance for riders during the current, and likely ongoing, health situation, without the need to travel elsewhere in the interim.

On Wednesday, however, it appeared to be all but decided that Milan-San Remo would take place on August 15, leaving RCS CEO Paolo Bellino and Giro d'Italia director Mauro Vegni angry at the new date, which would have seen an evening finish to the race in San Remo.

August 15 is the Italian public holiday of Ferragosto, which often signals the start of many Italians' summer holidays, and there was concern in some quarters that the importance of the race could be diminished, or that it would inconvenience some holidaymakers.

However, according to Italian newspaper Il Messaggero on Thursday, RCS, the UCI and the Italian cycling federation have now agreed on August 8 for Milan-San Remo, with Italy's other one-day Monument, Il Lombardia, taking place on August 15.

"San Remo on August 8 and Il Lombardia on August 15 is an excellent compromise," Italian federation president and UCI vice president Renato Di Rocco said on Ilmessaggero.it on Thursday, "even though it would have been nice to see many holidaymakers on the Riviera by the roadside to applaud the race.

"During such a difficult period, we have to think about restarting [the season] in the best way, with the awareness that there will be around the most important races," he said.

The weekend of August 22 and 23 – the week before the start of the Tour on August 29 – could now be freed up to used for various countries' national championships. A final decision by the UCI on the 2020 calendar is expected on Friday.