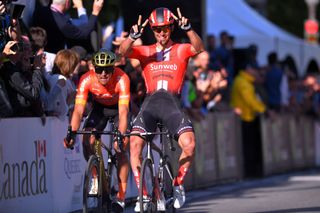 With professional cycling under growing pressure and teams ramping up their drive to cut or defer their wages, Michael Matthews (Team Sunweb) believes that everyone involved in the sport will be called upon to make sacrifices in the coming weeks and months.

On Wednesday, the UCI moved to postpone all races until June with the Critérium du Dauphiné the latest events to be postponed from the WorldTour calendar. There is still hope that the Tour de France may still go ahead sometime during the summer but with growing financial uncertainties, several teams, the latest of which are Bahrain McLaren, have been forced to cut costs.

Cyclingnews broke the story on Wednesday evening that riders on the Bahrain McLaren team had been forced to accept a 70 per cent pay deferral. Although Matthews's Team Sunweb squad have not been forced to make such a move just yet, the Australian fully believes that the current state of cycling will see teams and other organizations forced to make difficult economical decisions.

"I've been keeping track of all these communications and obviously some teams are having to make tough decisions," Matthews told Cyclingnews on Thursday morning.

"I've been in contact with my team a lot and we're quite privileged with our sponsors and Sunweb. For the moment everything is as good as it can be in this situation but if it comes down to it, some teams are going to have to do this to keep their teams alive and everyone has to do their part to make sure that continues. It's not a great situation for teams but they might have to do it because to keep WorldTour teams in the peloton there will have to be sacrifices."

Lotto Soudal were the first team to enforce a pay cut while Astana followed suit at the start of this week. The likelihood is that more teams will be forced to do the same. Meanwhile, the AIGCP has called for increased help – both financial and legal – from the UCI, the sport's governing body.

Matthews is supportive of both his team and the others that make up the AIGCP and trusts his employers to make the right calls, even though the circumstances are becoming increasingly difficult.

"I can only focus on my team though and they've been great. I've thought about it and talked to them. They've told us that things are currently safe and under control and I have massive trust in Iwan [Spekenbrink] and the team," Matthews explained.

"If it comes down to it, though, and if it does have to happen, then I'm sure that they will have done everything to make sure that it's the best move for the riders, staff and the rest of the team. I know that the management is doing an amazing job behind the scenes. It would be a hard call for Iwan to make but we all understand if it does have to happen for the long-term future of the team. It's sad to see it happen at other teams but right now everyone has to make sacrifices in other areas."

"I'm sure that the team is in contact with the UCI and working on stability because without the teams then UCI doesn't have a WorldTour. In the end, they make the smart decision over what's best for the teams in order to keep things going. When you see teams cutting salaries it's obviously hard times for some of the sponsors and if we don't have sponsors we don't have teams or races. It's all about trying to keep the sport going and hopefully, everyone makes the right decisions so that we can all keep the sport we love going."

Like the rest of the peloton, Matthews is currently waiting for racing to resume and for life to return to some level of normality.

At his home in Monaco, he can at least spend more time with his family and he has the company of the indoor trainer as he strives to keep his fitness in check. However, the former Tour de France green jersey winner is well aware that there's more at stake than just sport. The coronavirus pandemic has hit every corner of the world, with mainland Europe one of the hardest-hit areas.

"It's interesting. It feels strange but I'm just spending more time at home with my family and the sun is shining, so what else can you really do?

"My first thought is that I hope that we can all get this virus under control. It's quite scary when you see how many people are dying each day. You think about your friends and family but for the (racing) season I don't think anyone knows. I've been looking at the numbers of those infected and those dying and the numbers just aren't slowing down.

"I think they're talking about the Tour de France and making an announcement on that being on or off in May but until then I'm just trying to stay fit but I have no clear goal in terms of what I'm working towards. For goals, I don't think there are any clear ones.

"We're looking into some e-racing and I think that's a good idea. It'll keep everyone on their toes and it will be good to get some races on our calendar but as for outside racing, we just have to wait and see."