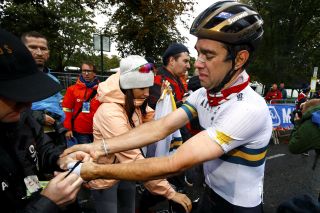 A disappointed Michael Matthews (Australia) gets help shedding his wet clothing after being unable to be in the mix at the 2019 World Championships elite men's road race (Image credit: Bettini Photo)

Australia's Michael Matthews had taken to the start line of the elite men's road race at the World Championships in Leeds, Yorkshire, on Sunday morning as one of the big favourites to take the rainbow jersey, but could only manage 24th place upon reaching Harrogate some six-and-a-half hours later after racing through continuous, heavy rain.

Matthews: Sometimes you need to be willing to lose the World Championships to win them

"It was horrendous," Matthews told reporters after the 261km-long race. "There are not too many other words to describe the day. It was one of those days that just grinds you down; you try to accelerate at the end and you've just got nothing."

The 29-year-old's seven teammates worked tirelessly for most of the day, keeping Matthews at the front of the race and out of trouble, with Rohan Dennis, in particular – winner of the Worlds individual time trial last Wednesday – sharing the pacemaking with members of the Dutch and French squads.

Dennis' day was over once the race reached the first of the none 14km finishing circuits in Harrogate, and eventually the whole team would climb off after manoeuvring Matthews into the main group of favourites.

"I think with four laps to go, when that group of five went, we didn’t have any guys left to go with it. I was trying to wait for the last two or three laps before I moved, but it didn’t come back," he said, with Denmark's Mads Pedersen winning the title after out sprinting Italy's Matteo Trentin and Switzerland's Stefan Kung.

"The race wound down too much and the guys were gone," Matthews said of his teammates, none of whom finished among the day's 46 finishers from 197 starters.

"In terms of conditions, yeah," he replied, when asked if it had been a tougher day than he'd been expecting. "But the course itself wasn't so hard.

"I think it was a sprint for maybe fourth or fifth," Matthews said of the 25-rider chase group he was part of, which was in fact led home by Norway's Alexander Kristoff for seventh place after three-time world champion Peter Sagan (Slovakia) and Denmark's Michael Valgren had slipped off the front of the group in the closing kilometres.