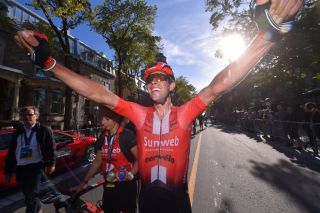 Same same, but different. For the second time in as many years, Michael Matthews (Team Sunweb) has responded to a frustrating Tour de France with victory at the Grand Prix Cycliste de Québec, but the parallels between the two wins have their limits.

Twelve months ago, despite his sparkling late-season form, Matthews had already been deemed surplus to requirement for the Australian team for the World Championships in Innsbruck. This time out, his victory felt like confirmation of his place among the elite caste of favourites who will line up in Yorkshire in a fortnight’s time.

"I’ve just been told a thousand times that it suits me, but I don’t even know what that means anymore," Matthews smiled when asked what he knew of the Yorkshire circuit.

Matthews’ remarkable versatility makes him a contender on just about every kind of parcours, but that dexterity brings problems of its own. His ability as a climber and rouleur meant that he was an automatic choice for the Sunweb squad to support Tom Dumoulin at the Tour, but when the Dutchman was forced out through injury, Matthews was then called upon to lead the team’s hunt for stage wins.

"I was really focusing on my climbing and the team time trial to help Tom, but then the plan changed," Matthews explained. "I was in good shape, obviously, but I wasn’t in any sort of sprint shape to go up against the best sprinters in the world. And for the punchy finishes, when you’ve got a guy like [Julian] Alaphilippe riding the way he was riding, what could you do?"

Unlike in 2018, when illness cut short his Tour in the opening week, Matthews fought on until Paris, and he had raced just twice since reaching the Champs-Élysées, at the RideLondon Classic and the Bretagne Classic. His recent training schedule seemed a direct reaction to his Tour disappointment – “100% commitment to my sprint and the short punchy climbs” – but on arriving in Quebec this week, Matthews confessed that he was unsure of the state of his form. Such doubts were allayed by his victory on Friday.

"I think it says good things," Matthews said. "Obviously, my sprinting is going well, though I need to work a bit on my positioning in the final.

"It’s pretty hard to gauge your form when you’re training full gas without a real indicator of how you’re going. You’re just smashing yourself every day, so you’re tired and you’re not showing any signs of getting better. Eventually, you need to take your rest and start racing. That’s what I’ve done here, and I guess I’ve surprised myself a little bit today."

As is so often the case in the Canadian WorldTour races, the final lap in Québec doubled as a roll call of the men most likely to pull on the rainbow bands in two weeks’ time, as Julian Alaphilippe’s late attack was tracked by both Peter Sagan and Greg Van Avermaet. If Matthews was marked absent there, then he amply compensated with a searing sprint from distance on the Grande Allée.

"I made a big mistake on the bottom of the final climb. I was only 40th wheel or something and it’s really a bit chaotic if you’re too far back. I really thought my race was over to be honest, but I did a big effort on the climb to get back to the front," Matthews said. "When this group of 5 or 6 went, with all the favourites of the race, I was kicking myself that I wasn’t in position to be able to go with them."

The break’s hesitation beneath the flamme rouge allowed the reduced peloton to swallow the escapees within 400 metres of the line. While Sagan and Van Avermaet could raise enough of a gallop to claim second and third, neither man could live with Matthews’ acceleration.

"I’ve playing a lot of Playstation recently and that definitely helped me to see all the gaps in the bunch and time my sprint," Matthews joked.

In the short term, Matthews’ display puts him in line to repeat his GP de Québec and GP de Montréal double of a year ago. It also suggests that he will be ready for the day of days in Yorkshire on September 29.

"I think it’s going to be one of those races where it’s a race of attrition, with probably a more select bunch than we have here in Canada, because of the weather and the distance,” Matthews said of the Worlds. "I think it’s 280k, so it’s going to be a very long day. If it’s a bunch of 50 or 60 guy like it was here today, I’d be very surprised."