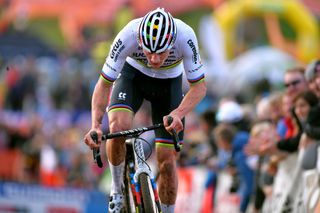 "I was not good enough," Van der Poel told Wielerflits after the race. "I always go for the win, but you can't win them all. Toon Aerts was very strong today. He always shows up very well on this kind of courses."

Aerts denied Van der Poel his 36th consecutive cyclo-cross victory at Hotondcross. Van der Poel's winning streak began at the Koppenbergcross in 2018. He has won nine races in this season in November and December.

Van der Poel back in cyclo-cross action this weekend

The cyclo-cross world champion had just returned to racing in Ronse after spending two weeks at a training camp in Spain to prepare for the road season.

On a wet and muddy course in Ronse, Van der Poel wasn't able to follow Aerts when he made his winning move in the opening laps.

Aerts built his lead from 30 seconds to over a minute on runner-up Iserbyt. Van der Poel surged partway through the race to try and close the gap but ultimately faded and struggled to maintain third position at over two minutes down. Michael Vanthourenhout (Pauwels Sauzen - Bingoal) finished four seconds behind him in fourth place.

"If you start the difficult parts with less concentration, you will make more mistakes. I knew very quickly that I would not close the gap anymore," Van der Poel said.

Van der Poel will take the start line at the Vlaamse Druivencross on Sunday where hopes to have a better performance.

"It may be better the second day, of course," he said. "But the [training camp] has been very difficult. So maybe it will be for next week."