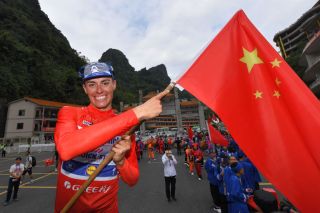 After a tough 2019 campaign, Enric Mas (Deceuninck-QuickStep) finally claimed a victory in his final race of the season, the Tour of Guangxi. The lightweight climber benefitted from a shake-up on stage 4, with the hilltop finish to Nongla Scenis Area lengthened with a steep final 1.5 kilometres to the line.

Mas, who is leaving the Belgian team after three years to head to his native Spain and Movistar, broke away on the steepest slopes of the hill, and out-kicked Daniel Martínez (EF Education First) and Diego Rosa (Team Ineos) on the final drag to the line.

"I think it's a good way to say thank you to the team, this nice family that I'm really sad to leave," he said after the stage.

Earlier in the week, Mas seemed resigned to the fact he was racing in China so late in the season, saying, "I'm a bit tired after the season, but here we are, we have to do it," and adding that he would attempt to race for the general classification in his final race for QuickStep.

Where Mas could raise his arms to celebrate victory as he crossed the line, numerous riders battling up behind him were a picture of exhaustion as they finished, with Lilian Calmejane (Total Direct Énergie) collapsing to the floor after crossing the line in 12th.

There was some debate as to how much teams had actually been informed about the climb beforehand. At the stage start in Nanning, Matteo Trentin (Mitchelton-Scott) and Team Sunweb directeur sportif Matt Winston were both in deep conversation about the finish with UCI commissaire Gianluca Crocetti.

"I think it was a surprise for all the teams," said Mas of the extended climb. "After some years they changed it in the last 2km, and we didn't know. We had some information, but we really didn't know."

Mas' confusion echoed what Max Schachmann (Bora-Hansgrohe) told Cyclingnews after stage 3, with the German saying, "There's still a question mark if the climb is longer this year. On the altitude profile the finish is higher, but the map is the same so it's really strange."

Still, despite the questions about the finish, valid as they were, it was the flyweight Mas who navigated his way into the unknown the best of the lot, crossing the line one second ahead of his nearest competitor, fellow climber Martínez.

The result came after a spot of well-worked teamwork by QuickStep, with Rémi Cavagna going on the offensive on the lower slopes of the climb. The Frenchman was caught on the flat section of the old stage finish, leaving a further 1.5km slog onwards.

After Anwan Tolhoek's (Jumbo-Visma) initial attempt on the steep run to the line, it was Mas, who had kept his powder dry for longer, who struck out and clinched the win.

"We knew that we had to stay in a good position for the left corner at the start of the climb," he said. "And the team did an amazing job. We were in the top 20 and then Rémi went full gas at the start. We caught him at last year's finish and the guy from Jumbo [Tolhoek] attacked.

"Then we were three at the front. I made the sprint and, luckily, I won."

After his triumph on the brutal slopes in, frankly, the middle of nowhere, Mas and his team have two days left to defend his red leader's jersey. Given that stages 5 and 6 are likely ones for the sprinters, the 24-year-old is odds-on to secure his first WorldTour stage race victory.

And while a possible race victory is unlikely to sate the ambitions of a man who started the year dreaming of a Tour de France win, it will still go some way to salvage a season which was, in his own words, "not the best year."

"This year I did most races with Julian [Alaphilippe] and had to work for him. Also, when I had the opportunity, I didn't have good moments. Finally I got a victory here and now I can be happy. It's nice to say goodbye like this. It's my last race with the team, and then tomorrow we will try to keep the jersey."