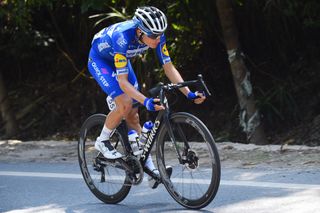 Enric Mas in action at the 2019 Tour of Guangxi (Image credit: Bettini Photo)

Enric Mas is among the plethora of riders saying goodbye to his current team at the Tour of Guangxi. The week in China draws his three years at Deceuninck-QuickStep to a close, and the 24-year-old is already looking to the future, and the off-season.

Mas has raced from the Volta ao Algarve through to October and, unless he takes victory on the hilltop finish on stage 4, will have endured a winless season. Ambitions were high at the start of the season, but a debut Tour de France bid ended in a disappointing 22nd place. It seems, then, like the right time for a change of scenery.

"It was not the best year because I didn't take a victory yet," the softly spoken Spaniard told Cyclingnews in Beihai. "Next year is a new chapter of my life because I'm changing team, and yes I'm happy to end the season. We will see next year.

"We're going to try to do something on the GC. I'm a bit tired after this season, but we are here, we have to do it."

Mas is joining Movistar on a three-year deal next season, with the move marking the first time he's raced for a Spanish team since he was at the U23 Fundación Alberto Contador squad in 2015.

After proving his mettle as a general classification rider at QuickStep with a second place at the 2018 Vuelta a España, Mas will be expected to fill the chasm left by the departing trio of Nairo Quintana, Richard Carapaz and Mikel Landa, and the three Grand Tour wins they took at the Spanish squad.

The move will be a big change given the contrasting focuses of the teams, with Mas one of few GC riders on a team with priorities largely lying elsewhere. And as well as Movistar being more focussed on stage racing, Mas also benefits from 'coming home' culturally.

"It has been really nice at QuickStep," he said. " I think it was necessary to be here for some years to learn how they work, how to do everything. I want to say thank you to everyone there. They've helped me learn and it was amazing.

"A lot of things [influenced me] – one important factor was that Movistar is a Spanish team. And the Spanish are a bit different, with a special character. Sometimes when we do some jokes, we understand it when others don't. This is one of the reasons, because of the language."

Mas added that he has friends at the team, including neighbours from the tiny Pyrenean principality of Andorra.

"Also, it's because of the riders that Movistar have, like Valverde, Soler and others I know from Andorra. It's also because of the GC focus. I think that I need a team around me if I want to try and do a good GC in Grand Tours."