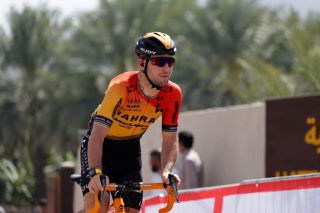 Mark Cavendish has not ridden the final race of his career, as he has been confirmed to start Scheldeprijs on Wednesday.

The 35-year-old hinted at retirement in an emotional interview at the finish of Sunday's Gent-Wevelgem, where he was in the main breakaway. "That’s perhaps the last race of my career now," he said.

However, on Tuesday, Bahrain McLaren announced their seven-man line-up for Scheldeprijs, and Cavendish, who has won the race three times, was present. Although bib numbers have not yet been confirmed, Cavendish was named as the lead rider in the team announcement, but it remains to be seen if he leads the line or if Sonny Colbrelli is the designated sprinter.

The other riders on the team are Ivan Cortina, Marco Haller, Luka Pibernik, Chun-Kai Feng, and Fred Wright.

Cavendish was always scheduled to race Scheldeprijs, the cobbled Classic that usually ends in a bunch sprint. His comments after Gent-Wevelgem appear to have come from a rumour in the peloton on Sunday that Scheldeprijs and Sunday's Tour of Flanders were set to be cancelled, but both are going ahead for now.

Whether Scheldeprijs is Cavendish's final race is the next question. He isn't due to ride the Tour of Flanders, nor the Vuelta a España, and it should be his last appearance of the season, if not his career.

Cavendish has not yet secured a contract for the 2021 season, but Rod Ellingworth recently said negotiations at Bahrain McLaren were ongoing and suggested Cavendish would continue to race next year. However, Cavendish's demeanour at the finish of Gent-Wevelgem suggested he had come to terms with the fact that the end of 2020 will be the end of the road.

Cavendish won Scheldeprijs as a first-year pro in 2007 and won it again in 2008 and 2011 as he rose to sprinting dominance. His results have waned, however, since he came down with Epstein Barr Virus in the aftermath of an intense 2016 campaign. In 2019 he was declared as under the threshold for the virus and he reunited with Ellingworth at Bahrain McLaren for the 2020 season, but has not returned to being competitive in the sprints.

The 2020 edition of Scheldeprijs will take place entirely within Belgium, avoiding its usual windswept passage through the Netherlands due to coronavirus restrictions.