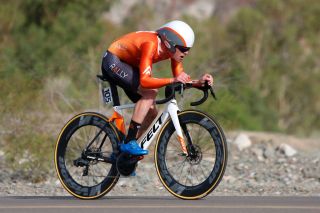 A quick look at the results after stage 4 of the Tour Colombia 2.1 reveals an anomaly among the long string of Colombian and Ecuadorian flags next to the riders’ names, as a lone stars-and-stripes avatar sits among them in the top 10 of the general classification.

Rally Pro Cycling’s Gavin Mannion is responsible for that US flag. The 27-year-old is sitting eighth overall, the only non-South American in the top 10 before Italian Fabio Aru – a former winner of the Vuelta Espana, a podium-placer at the Giro d’Italia and a stage winner at the Tour de France – comes in at 11th.

Mannion moved up six spots in the GC by finishing 14th on the stage 4 summit finish in Santa Rosa de Viberto, crossing the line in a group 21 seconds back from stage winner Sergio Higuita (EF Pro Cycling) – just behind Aru but ahead of such WorldTour luminaries as Bob Jungels (Deceuninck-QuickStep) and Sergio Henao (UAE Team Emirates).

The stage climbed to dizzying heights, going over the category 3 Alto de Malterias at 2,732 metres just 2.9km from the finish. Mannion finished second in his nine-rider group after Aru outsprinted him to the line. It’s a result that backs up his ninth-place overall finish last month at the Vuelta a San Juan in Argentina.

"That was a hard finish, that's for sure," Mannion told Cyclingnews on his way to the team van after the finish. "I got outsprinted by Fabio Aru at the end, and so it's nice to be able to throw down with some of the best in the world."

Mannion is competing against a slew of riders who live above 2,500 metres and others who have been in Colombia for some time in training camps with their teams.

Rally arrived a week early and trained at the lower elevations around Bogota after racing at San Juan, not the ideal preparation for such a difficult race. But Mannion is rising to the occasion.

"The altitude has been rough," Mannion said. "We were in Argentina beforehand pretty much at sea level. Luckily it was really hot there, which is kind of the similar adaptation as altitude, so it was better than nothing, but definitely not the same as living here.

"We came in with pretty realistic expectations, knowing that without being Colombian or having been at 8,000 feet for awhile it would be tough to do anything GC-wise," he said. "But we had a good TTT and I had a good GC in San Juan, and the team kind of put all their eggs behind me in GC. So we'll see how it goes at the end of the week."

Mannion's team director Jonas Carney was duly impressed with his young charge's performance, noting that Mannion is riding against some very stiff competition.

Mannion and the other GC riders will likely have a bit of a break from hostilities on Saturday, as the 180.5km stage from Paipa to Tour de France champion Egan Bernal's hometown Zipaquirá looks on paper like another day for the sprinters. But Sunday's queen stage will be one for the ages.

The final stage begins in Zipaquirá and finishes with the climb up Alto del Verjón, a category 2 ascent that tops out at 3,290 metres. The final GC will take shape there.

"Sunday will be a bloodbath," Mannion said. "It's the last day of the race, so everyone will be throwing bombs, but I'm looking forward to it – kind of. I think it will be tough. I think a top 20 here, given the amount of good Colombians and WorldTour guys, would be a pretty damn good ride considering our prep coming in to it. We'll see how it goes on Sunday."

After Colombia, Mannion will head home to Colorado for a short break, then ramp up training again in March for three months of racing in Europe, starting with the Giro di Sicilia in April 1. Rally won the race last year with Brandon McNulty, who has since moved to the WorldTour with UAE Team Emirates and is expected to return to Sicily to defend his title.