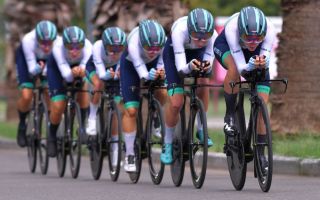 Lizzy Banks has expressed her dismay, disappointment, and anger over French fashion company Paule Ka’s decision to pull its title sponsorship and funding from Equipe Paule Ka, which has forced the team to shut down with immediate effect.

“(I feel) hugely let down by Paule Ka, by their management, their owner Matthias [Thoma],” Banks said in an interview published on Eurosport UK.

“He threw us a lifeline and we were all so grateful and so praise-giving towards him, when he’d come on board in the middle of a pandemic and committed to us for three-and-a-half years."

Équipe Paule Ka announced Friday that they will close immediately due to major financial problems. Paule Ka stepped in to sponsor the team on what was announced by the team as a three-and-half-year deal through 2024, after the previous sponsors Bigla and Katusha withdrew funding amid the COVID-19 pandemic.

However, Équipe Paule Ka claimed that the sponsor was late with its first payment in July and then failed to pay the team in August, September and October, despite multiple assurances that the payments were on their way.

Cyclingnews reached out to Paule Ka owner, Matthias Thoma, for clarity on the company's decision to pull funding from the team, however, Cyclingnews understands that the company and the team have agreed not to discuss the matter in the press.

"At this time my only comment is that the owners of team and company are in negotiations about a dissolution of the sponsorship agreement," Thoma told Cyclingnews, both before and after the team's announcement that it would end.

Cyclingnews understands that Paule Ka had agreed a €800,000 sponsorship package for 2020 but left the team fighting to survive during the rescheduled season, with team manager Thomas Campana personally funding the team’s activities to the tune of €300,000.

"Unfortunately, the team was left without any funding and my wife and I supported the team privately," Campana said in an interview with Eurosport. "We wanted to see the girls racing in the most important races; Giro Rosa, World Championships, Classics races, and they deserved it so much because they stick together ... but to the point where we were simply just not able to continue."

Campana told Eurosport that the written agreement between the team and Paule Ka stipulated that the company would fund the team as UCI Continental team for the remainder of the 2020 season.

That was followed up with a verbal agreement between the team and Paule Ka to fund the team on a multi-year deal going forward as a Women's WorldTeam through 2024.

"Based on the situation that the team is a UCI Continental team, the first contact that we did with them was for the remainder of the season 2020," Campana told Eurosport. "And it was verbally agreed that we were going to bring the team to a WorldTour level for the next four years in order to receive the licence from the UCI."

The team was scheduled to compete in Tour of Flanders on Sunday, but are now forced to end and stop competition immediately, and the riders will not take the start line in Oudenaarde.

Équipe Paule Ka have requested to open their bank guarantee, for the second time this season, to help pay a percentage of rider salaries. The bank guarantee is a percentage of the team’s overall budget. It acts as a pre-season deposit consisting of 25 per cent of the team's payroll which can be accessed in times of financial difficulty – and make up the payment shortfall.

The team has been hugely successful this season under the new Paule Ka brand with a stage win at the Giro Rosa from Banks, along with winning the best young rider competition with Mikayla Harvey, and the team had podium performances at Strade Bianche with Leah Thomas, and GP de Plouay with Banks.

Banks, Harvey and Thomas were also signed to race for the team in 2021, however, the riders will now be forced to look elsewhere for a team.

"We paid [sponsorship] back immediately by going out there and getting some results which are unheard of for WorldTour teams sometimes, let alone a small Continental team who’ve managed to raise their way up to fourth in the world," Banks said in the report published on Eurosport.

“We believed that we had everything going for us. A small team fighting and achieving and getting results at the highest level, and we were going to continue to do so for the next three years and we were working towards being a WorldTour team. And suddenly it all gets ripped from you.

“I’m so angry that he [Matthias Thoma] has let us down like this and he has let women’s sport down. It’s put us in a position where we’re negotiating for contracts at a time when it’s terrible to negotiate for contracts right now. If we’d have all been on the market one month ago then it would be a very different situation.

"But despite that, we thought that women’s cycling was in a better place, because we thought we had a sponsor who really believed in us, who believed in what we could do.

“I don’t want to be bitter about this sport, I don’t want it to make me bitter, but it’s a really, really hard pill to swallow.”