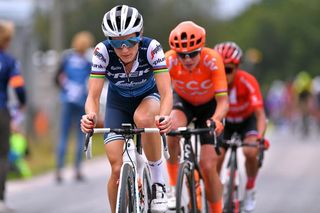 The UCI surprised the cycling world with confirmation that it added Paris-Roubaix to the revised Women's WorldTour calendar on Tuesday. Lizzie Deignan (Trek-Segafredo) said news of the race was an exciting prospect and that the iconic Classic has the power to attract more fans to the women's side of the sport.

"Obviously this is an amazing surprise, I’m really delighted!" Deignan said in a team press statement. "I think Paris-Roubaix is an iconic race, one of the races that attracts most fans in cycling and if we can attract those same fans to women’s cycling, I think it’s a really positive thing.

"The race will happen at the end of an intensive racing period and in the aftermath of such a challenging year with the coronavirus pandemic but to have a Paris-Roubaix to look forward to makes the motivation easy. It’s such an exciting prospect to be able to race there and I think we have a strong team to challenge for the win there."

The UCI published a new late-season race calendar after many spring and summer events had been either cancelled or postponed due to the coronavirus (Covid-19) pandemic. The revised calendar retained 18 of the 22 Women's WorldTour events, and is now set to take place from August 1 to November 8. The schedule will include five stage races and 13 major one-day events with the new Paris-Roubaix set to take place on October 25.

"It’s a step forward for women’s cycling to have another Monument added to the women’s calendar," said Trek-Segafredo director Ina Teutenberg.

"It’s a historical race which is always epic since it has cobblestones. It gets a lot of media attention, and I think a lot of our riders will be super stoked to ride over these cobblestones. We have riders who can get over this type of difficult terrain so we will be competitive."

In an interview with international journalists on Tuesday, UCI President David Lappartient said that discussions to create a women's edition of Paris-Roubaix have been in the pipeline with ASO for years. He said his most recent discussions with ASO included an agreement to host a first-ever edition as part of the revised Women's WorldTour.

"We believe that Paris-Roubaix is one of the greatest Classics in the world, and for me, there is no reason not to have a Paris-Roubaix [for women]," Lappartient said. "We had good reception from ASO, and for us, it is a matter that gender equality is moving the right way. It’s really moving with the new Women’s WorldTour and teams, and moving with races like this one, and we hope moving with some big stage race, that we need. So, yes, [having a women’s Paris-Roubaix] is very nice and I saw some comments on social media that were very positive. I believe that for women it is important to have the same opportunity for men."

ASO said on its official Paris-Roubaix Twitter channel that the route for the women's event has yet to be determined, however, such details can be expected shortly.

"I’m super excited to have a women’s Paris-Roubaix!" said Ellen van Dijk. "I think it’s a race a lot of riders are looking forward to finally be able to race and are thrilled that it’s on the calendar. Maybe that’s the silver lining after this difficult period: the fact that the men’s race had to be re-scheduled for the fall which made it possible to also host the women’s race.

"This is something positive and I’m super stoked. Personally, I like the cobbles and it’s a flat course which I like as well. Paris-Roubaix is a historical race and it will be super cool to race over these legendary roads. It’s set for late October when the weather is sometimes not the best, but it will probably be an even better race if it takes place in wet conditions where anything can happen. The more epic it is, the cooler it is, and I would love to be part of this first edition of the women’s Paris-Roubaix."

Lappartient stressed that the revised calendar is dependent on the development of the COVID-19 virus along with the health precautions and guidelines stipulated in each nation. Lucinda Brand said that even if the events cannot be raced this year, having a women's Paris-Roubaix on the calendar this year, and potentially next season, was a positive change.

"It’s good to finally see a women’s calendar," Brand said. "Of course, it’s hard to predict at this point if we will be able to race all the events but at least it gives us a direction to work towards and that’s really helpful, especially mentally. I see most of the big spring classic races, which are all hard races, are there and of course the big surprise is Paris-Roubaix which is really cool.

"Even in this difficult year we’re in they want to let us race this special race that the women pro-peloton was wishing to race for a really long time. This is a step forward and one I didn’t expect to happen already this year. I’m really excited about it."