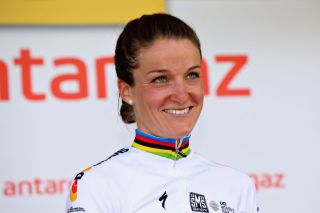 Lizzie Diegnan will lead a six-rider selection at the upcoming UCI Road World Championships held in Yorkshire at the end of September. The former world champion said she was delighted to be chosen to compete in the elite women’s road race, particularly as they are held near her hometown.

"It is always an honour to be picked to represent your country and I can’t wait to do so again this September in Yorkshire," Deignan said in a team press release. "It will be extra special as it’s on home roads and a chance to race in front of friends and family. It’s great to see so much strength in the British squad this year too. Women’s cycling has come on so much in this country and there are some really talented riders joining me on the team. I look forward to racing with them."

Deignan returned to competition in April, eight months after the birth of her daughter, with Trek-Segafredo. She is focussed on competing at the Yorkshire World Championships and the Tokyo Olympic Games next August. She plans to retire following the Olympic Games.

Deignan will lead a team of six riders in the elite women’s road race that also includes sisters Hannah and Alice Barnes, Lizzy Banks, Nikki Juniper, and Anna Hendersen. The women will race 149km on September 28.

"For the road race, Lizzie Deignan made no secret of her ambitions to be selected for her home road worlds and has come back to racing this season at a very high standard," Team GB’s women’s coach Chris Newton.

"Hannah Barnes is no stranger to competing at this level and has had a consistently strong season racing for her pro team. Much like the time trial course, we know the hilly nature of the road race course suits Alice Barnes’ skill set and similarly we know Lizzy Banks can be confident of her abilities on this tough course, as demonstrated by her victory in stage eight of the prestigious Giro Rosa in July.

"Anna Henderson has represented Great Britain a few times now and has made great progress so I’m confident she will play an important part in this team, and similarly Nikki Juniper has proved to be a valuable team mate when she’s ridden for Great Britain at major races.

"The fact this race is in Yorkshire has added an extra level to everyone’s motivation levels for this event, and I think with the squad of riders we have we can expect to see some strong performances in both the time trial and the road race."

Alice Barnes, who is the current road and time trial champion of Great Britain, and Hayley Simmonds will participate in the 30km individual time trial held on September 24.

"The standard of women’s road riders continues to improve year on year, which put us in a good position to have such a strong longlist of riders from which to pick the final team," said Newton. “The technical time trial course will play to Alice’s strengths and, likewise, we know Hayley can perform on a course like this as she won the bronze medal in the Commonwealth Games 2018 on similar terrain."