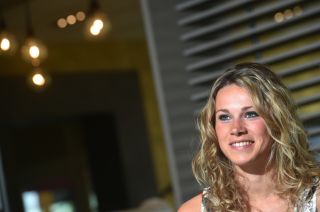 Marion Rousse was the subject of a cartoon published in L'Humanité Sunday that the French news outlet later took down after public backlash deemed the illustration sexist, vulgar, degrading and misogynistic.

Rousse is a former French champion and a prominent figure during the Tour de France for her expert analysis and commentary on France Télévisions. She said she felt 'disillusioned' by the cartoon and that L'Humanité had 'no respect for women'.

"I am disillusioned," Rousse wrote in a post on Twitter. "L'Humanité lives up to its name less and less. You have to have no respect for women, to reduce six years of sports reporting on television to this level."

The cartoon, illustrated by Espé, depicted Rousse mostly nude sitting on a bed and holding a microphone while interviewing Deceuninck-QuickStep rider Julian Alaphilippe. It was published alongside an article written by former cycling coach of the Festina team and columnist Antoine Vayer as part of his daily chronicle during the Tour de France.

The ninth installment of La Chronique d’Antoine Vayer, published on Sunday, discussed the sexual activity levels of cyclists both from an historical perspective and during COVID-19, and how sexual activity relates to cycling performance during the racing season.

Backlash erupted across social media against L'Humanité for publishing the cartoon, calling it sexist, while sports journalists expressed support for Rousse.

"That this type of sexist, degrading and vulgar humour is still being inflicted on us in 2020 plunges me into deep dismay," wrote Elise Madiot on Twitter.

L'Humanité later unpublished the Espé cartoon and Vayer’s chronicle and issued an apology to Rousse.

“We totally share the indignation at this drawing. We quickly unpublished it. It's contrary to the values of L'Humanité, which promotes the dignity of human beings and the feminist struggle. We ask Marion Rousse to excuse us for this lack of vigilance."

L'Humanité also issued a statement to AFP, which was reported in La Presse, saying the publication had ended its collaboration with Espé and Vayer.

“A publication like this is contrary to the history of the newspaper," the statement read. "All those who read us regularly know that our titles fight daily for the emancipation of women and defend values of universal equality.

"We hope that the lack of vigilance which has led to this situation will not be repeated. We are delighted with the end of the collaboration between our daily, the designer Espé and the chronicler Antoine Vayer, whose texts the latter illustrated."

Vayer defended the drawing on his Twitter account, drawing a parallel with the Charlie Hebdo cartoons. Espé issued an apology for the illustration stating that the cartoon was a 'mistake'.

“I'm so sorry, sorry, sorry. The newspaper has apologized, the cartoon has been unpublished, and I’ve stopped working for L'Humanité," the cartoonist said.

"My goal was absolutely not to cause pain, I didn't think of doing that – it's just caricature. I wanted to evoke the relations between media and sport and I wanted to be inspired by the drawings of Tex Avery. I messed up. When a drawing is not understood it is a mistake, but I would not have thought it would take on such proportions."