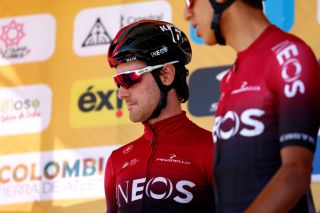 Team Ineos were forced to withdraw their riders from the Italian Championships last month after Leonardo Basso tested positive for the coronavirus but he told Tuttobiciweb that two further PCR tests came back negative, while further serological analysis revealed that he had never had COVID-19.

Basso’s case mirrors that of his fellow countryman Oscar Gatto (Bora-Hansgrohe), who returned what was later shown to be a false positive in a PCR test ahead of the Bretagne Classic last week.

Basso and his Ineos teammates Filippo Ganna, Salvatore Puccio and Gianni Moscon did not participate in the road race at the Italian Championships after his positive test was revealed on the eve of the event.

“I got the report on Saturday afternoon before getting to the hotel, and the protocol was activated, which meant the whole team was pulled from the Italian Championships and everybody went into self-isolation at home,” Basso told Tuttobiciweb. “On Monday, August 24, I underwent a second test, which came back negative. My family, my girlfriend and my contacts on the team all return negative tests too.

“To be certain that the first one had been a false positive, I underwent a third swab on Friday 28, which also came back negative, and then I underwent a serological analysis which proved the absence of the antibodies of the virus in my body. The first positive test was an error.”

Basso spent eleven days in isolation at home after learning of the initial positive test, but he has begun training on the road again in the past two days. He plans to return to racing at the Giro di Toscana on September 16.

Filippo Ganna and Salvatore Puccio are both included in the provisional start list for Tirreno-Adriatico, which gets underway on Monday.

“I don’t know if there are more efficient tests than the ones we’re doing, but maybe it would be a good idea to do a double test with an A and B sample, as happens with an anti-doping test, although I don’t know if that would be feasible at a scientific level,” Basso said.

“I don’t have the qualifications to say so and I know that we’re having to deal with a really complicated situation. What we have to look to improve is the speed of the second test in order to avoid cases like mine.”

All riders and staff on the Tour de France are due to undergo their next round of PCR tests on Monday’s rest day, and any team that records two or more positive tests will be excluded from the race.

After concerns were raised by teams following several reports of false positives in professional cycling, ASO confirmed that rapid secondary testing would be carried out to confirm any positive cases.