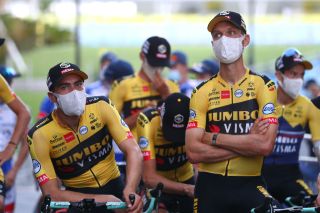 The UCI has made a last-minute update to its COVID-19 medical protocol to help avoid the risk of false positive cases and the possible expulsion of riders and teams during the Tour de France and other Grand Tours.

A spate of apparent false positives has forced several riders and teams to miss races and teams were concerned about a Tour de France rule that forced a whole team to quit the race if two of their 30 riders or staff tested positive.

A special investigation by Laura Weislo for Cyclingnews highlighted how false positives can occur and why follow-up tests are vital to eliminate them.

After a series of meetings between the UCI, teams and the Tour de France organiser ASO, the 'two-strike, team out' rule has been changed and now only applies if two riders (not staff) test positive within a seven-day period.

If race staff test positive, as occurred with two Lotto Soudal staff on Wednesday, the team can stay in the Tour de France.

The last-minute update to the medical protocol will ease the fears that a number of teams, perhaps even the race leader or overall contenders, could be expelled from the Tour de France based on false positive COVID-19 cases from single tests.

The UCI specified that the positive cases have to be confirmed via extra testing before the race organiser can announce the withdrawal of a full team.

The UCI ordered Grand Tour race organisers to do "everything possible" to ensure complementary tests and a serological analysis are done before the next day’s stage start whenever a positive test emerges.

However, if complementary testing cannot be done in time before the next day’s stage, the rider or staff member will still have to leave the race, even if their result appears to be a false-positive.

Tour de France organiser ASO has created a mobile testing unit at the race, which will now likely have to work overnight to complete any complementary testing to avoid false positive cases being expelled from the race.

"Test results will be given within two hours maximum, sometimes even an hour. In any case, it is not the next day that we will have the results, we will have them very quickly, " confided race director Christian Prudhomme at a press conference.

"The adjustments made today to the UCI protocol have enabled us to find the right balance between the legitimate concerns of teams faced with the risk of exclusion and the vital preservation of the peloton’s health," UCI President David Lappartient said.

"I call on all cycling’s families, in particular the riders and teams, to continue acting with the same sense of responsibility and united spirit that they have demonstrated since racing resumed. All the protective measures respecting the rules such as wearing a mask in the hotels and buses must be scrupulously followed.

"We must give the Tour de France and the 2020 cycling season a chance to carry on to the end, and give our sport, heavily affected by the health crisis, a chance to move forward."