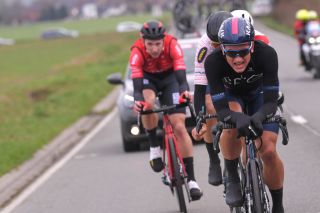 With a dearth of racing affecting all levels of the sport – not just the WorldTour – SEG Academy have taken the initiative and launched the SEG eRacing U23 Series.

The races will take place on the RGT Cycling platform during the last week of April and the first half of May, with several of the leading U23 squads taking part.

Along with the SEG eRacing Academy, squads from the Jumbo Visma Development Team, Hagens Berman Axeon, GB Cycling Academy and U23 teams from Belgium, the USA and Germany will all take part. Several teams, including the FDJ and Sunweb development squads, are also rumoured to be in close discussions with the hosts.

SEG go all-in with eSports and win the next day

Following the two one-day style races, teams will compete in a three-day stage race from May 7-9. The first stage is a flat 38.5km Borrego Springs Crit, with a 42km Paterberg race taking place 24 hours later. The final stage will see riders take part in the 25km Mont Ventoux stage.

"We’re doing this on RGT, which is a bit more realistic in terms of racing. It makes it easier for the U23 riders to be competitive and you still need to be able to get the tactics and the power right," Aike Visbeek, team manager at SEG eRacing, told Cyclingnews.

"That means it’s a bit more motivating than racing against the more experienced Zwift pros. And this project gives the U23 riders motivation to compete against the other young guys at a same level."

🚨 Important announcement 🚨We are delighted to announce that the SEG eRacing Academy, together with @rgt_cycling and @joincyclingapp, launches the SEG eRacing U23 Series. The first-ever international eRacing U23 competition📲 https://t.co/Db6ymqhF8U#talentdevelopment pic.twitter.com/nu4S0ZX95yApril 23, 2020