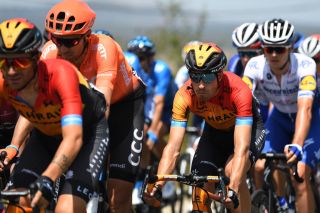 Mikel Landa (Bahrain McLaren) said he was satisfied with a steady if not spectacular ride on his first major summit finish challenge at the Picón Blanco during stage 3 at the Vuelta a Burgos on Thursday which saw him take a solid third place behind Remco Evenepoel (Deceuninck-QuickStep) and George Bennett (Jumbo-Visma).

Landa went from less to more on the final, decisive climb, staying in the dwindling group of favourites, opting to ride at his own pace when Esteban Chaves (Mitchelton-Scott) launched two attacks late on, but then moving steadily up through the chasers to finish 32 seconds behind Evenepoel.

A former winner of the race back in 2017 and with wins both in Lagunas de Neila and Picón Blanco in his palmarès, Landa praised his team for their solid work at pulling back a late series of echelons after the wind suddenly whipped up in the final hour.

He predicted that he would be back in the fray on Saturday's showdown in Lagunas de Neila, too.

Ever-versatile Evenepoel soars to sixth win of season in Burgos

"I'm happy, I think it's been a hard stage, the wind was a surprise but the team reacted very well, closing the gap," Landa said after stage three. "And I got third today, that's good."

Landa said he expected more fireworks on Saturday, given it has a format that has a lot in common with Thursday's stage. "It's shorter, maybe more explosive but we will try also," he concluded.

When asked about Landa's performance on stage 3, Bahrain McLaren directeur sportif Tim Harris told Cyclingnews, "There were a lot of people attacking, left right and centre. And he just rode within himself, rather than go with them. And he knows that climb very well, of course, which was to his advantage."

As for the point when the bunch split apart, Harris said "at a certain moment, there was a crazy wind got up from one minute to the other and suddenly the whole peloton began splitting.

"Ineos and Bora had a lot of guys up there, but we didn't panic, rode to keep it back together. That was a crucial moment, but that can happen in Spain, everybody's worried about the climb and then the wind splits it, like it did in the Vuelta" – on stage 17 to Guadalajara – "last year."

As for Picón Blanco itself, Harris said that it was the first proper test of the new season, in the mountains, and a good indication of what Landa can do.

"You've got to remember people are coming out of very different conditions during lockdown, some could train a lot during confinement, others, like here in Spain, much less so because it was so strict. So that was a good ride by him," Harris said.