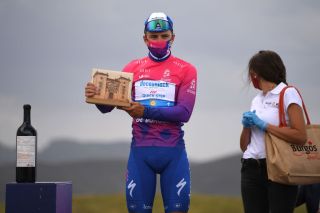 Whether it's the first start of the 2020 cycling year, or the second, in one sense in doesn't matter to Remco Evenepoel (Deceuninck-QuickStep) as the young Belgian star – already victorious five times this year – claimed an impressive sixth win on the stage 3 summit finish of Vuelta a Burgos on Thursday.

Already on the attack late on in stage 1's flatlands, when he almost singlehandedly blew the field apart before sitting up, 48 hours later Evenepoel blasted clear again on utterly different terrain, with two kilometres to go to the summit of the fearsome Picón Blanco climb.

By the top, Evenepoel was 18 seconds clear of climbers as talented as George Bennett (Jumbo-Visma) and 32 seconds Esteban Chaves (Mitchelton-Scott). Other stage racing names as big as Simon Yates (Mitchelton-Scott), Fabio Aru (UAE Team Emirates) and Richard Carapaz (Ineos) were even further adrift.

For the ultra-versatile Evenepoel, already the winner of the Clásica Sán Sebastian and multiple World Championships titles at junior level as well as a string of other races, Burgos represents another big step up the cycling hierarchy for the 20-year-old.

Or if you want to go back to January and February, when he was winning the Vuelta a San Juan and the Volta ao Algarve, you could argue Evenepoel was simply continuing where he left off, prior to cycling going into suspended animation this March.

Unlike in the Algarve, though, where Evenepoel's first summit win of the 2020 season came in a spectacular battle down to the wire against Max Schachmann (Bora-Hansgrohe), on this occasion, the Belgian blew the opposition away as and when he wanted three quarters of the way up the climb.

Chaves tried his best to open up a gap with three big digs, but – with the glorious benefit of hindsight – it looked as if the Colombian was putting off the inevitable moment when Evenepoel charged away for as long as he could.

"Coming into that last kilometre there was a full headwind so it was very hard because I was already going all out," Evenepoel told reporters afterwards. "But then it was windy for everybody, and I just kept pushing.

"I heard the gap was increasing and increasing" – at the time of speaking, Evenepoel did not know that Bennett did manage to pull back some time in the final kilometre – "so that's really good. I could get to the line.

"It's really nice because the team really prepared me well for this stage, and it was my job to finish it off.

"The whole day they were always asking me how I felt, keeping me out of the wind and bringing me bottles. For sure without the team I could not achieve this victory."

He did not mention it, but his teammates also helped bring the race back together when Evenepoel – along with almost all the rest of the peloton bar Ineos and Bora-hansgrohe – missed out on a dangerous split with around 50 kilometres to go.

"My first goal was not to get dropped or lose time and then in the end in my earpiece, I heard the DS tell me to try to do something because he could see I was really fresh and the others were suffering. I was also on the limit and it was a risk, but without risking you never win," Evenepoel added.

Should the seemingly unthinkable happen and Evenepoel get in trouble between now and Saturday, Deceuninck-QuickStep also have a Plan B in the bag, after another one of their promising young guns, 21-year-old João Almeida coming in an excellent fifth at Picon Blanco at 45 seconds. The two are now first and fifth overall.

The Belgian squad also have serious options on Friday's bunch sprint stage with Sam Bennett, where the slightly tougher finale, with a short uphill ramp in the final kilometre, could well do Bennett no harm when it comes to taking on stage 2 winner Fernando Gaviria (UAE) - where Bennett was third.

However, the main plan from hereon for Deceuninck-QuickStep will surely be about Evenepoel winning the highest profile stage race to date in the 'new normality era'.

"It's a dream to get the stage win and the overall, and now we try to keep the jersey to the end," Evenepoel argued after stage 3. "Tomorrow is a sprint, but Saturday there's another a  summit finish, so it is not in the pocket yet.

If you don’t try, you don’t win! Pretty tough race today especially with the wind! Big thank you to my team, without them this win wouldn’t have been possible 🐺🤟🏼 Still 2 stages left but we’ll continue to give everything! #TheWolfpackIsBack #VueltaBurgos Photo’s: @gettysport pic.twitter.com/Z8ZFg78XEtJuly 30, 2020