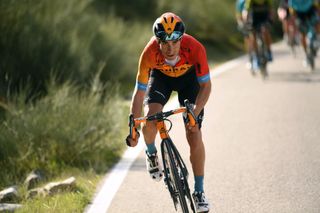 Mikel Landa believes he could be at the peak of his powers, claiming he has matured physically and mentally and feels stronger than ever.

Shortly before switching teams to Bahrain McLaren, the Spaniard turned 30 in December, which he says has contributed to the feeling he’s at the top of his game.

At Astana, Team Sky, and Movistar, Landa had to share leadership with other big names and often found himself having to sacrifice his own interests. Now at Bahrain McLaren, he’s set to lead the line at the Tour de France with full support.

Interviewed on Spanish state sports TV channel Teledeporte, Landa was asked if he was in the ‘best moment’ of his career.

“It could be… I hope so, anyway,” Landa, said when asked if he was in the best moment of his career.

“The truth is I feel more mature, physically and mentally. Each season that finishes I say ‘damn, I didn’t know enough. But I feel stronger, and I find it easier to find my form and maintain it.

“I’m enjoying being in a new team that’s giving me a great opportunity, and yes, I think I am at my best.”

Landa arrived in the French Alps on Thursday to scope out some of the key stages of the Tour de France, which will now take place from August 29-September 20. Next week he will move on to Andorra for an altitude camp, where he will link up with a number of Tour teammates for two weeks.

“I’m new to the team, and it’s important to get to know the group before any race,” he said. “A lot of situations and setbacks can arise and when you have trust in your teammates, everything is easier, so it’ll be important to spend those two weeks with them.”

Landa will return to racing at the Vuelta a Burgos in late July, followed by the Circuito de Getxo one-day race in his native Basque Country, and then the Criterium du Dauphine in France ahead of the Tour.

A decision on whether to head to the Vuelta in late October and November will be taken after the Tour, where he’s looking forward to having a team behind him.

“I’d like it if that was the initial plan – to race to win, and maybe in a bit more of a conservative way. I hope it goes well and I can take advantage of the opportunity they’re giving me. If I’m leading the team and I have a squad that’s backing me at all moments – good and bad – then I hope to be up there.”

While racing has been interrupted, the team’s stability has taken a knock due to the COVID-19 pandemic, but Landa said the riders have received assurances they will continue next year.

McLaren, who came on board at the start of the year, has found itself in major financial difficulty, laying off a significant chunk of its workforce. It is unclear what the impact is on the cycling team, but riders have already had to accept wage deferrals.

“From the team, they’ve informed us that the continuation of the team is guaranteed,” Landa said.

“The team existed before McLaren and it will exist next year – I believe still with McLaren, I don’t know, but the team have told us the continuation of the team is guaranteed.”