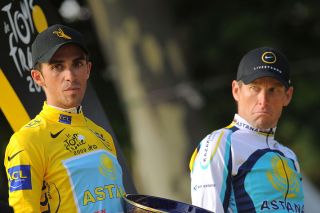 Lance Armstrong has admitted that 'the best man won the race and it wasn't me' in reply to questions about his intense internal rivalry with then Astana teammate Alberto Contador during the 2009 Tour de France.

Last week, Contador revealed details of the power struggle between the Spaniard and veteran Armstrong, the winner (at that time) of seven editions of Tour de France in a video interview with YouTube vlogger Valentí Sanjuan.

Contador was left isolated when Armstrong and the Astana team attacked en masse in the echelons on stage 3 but then attacked en route to Andorra and again in Switzerland to set-up overall victory. In Andorra, Contador regained enough time to move past Armstrong in the overall standings and take back team leadership, but his attack sparked a huge row on the team bus.

"Then he came up to me after everybody else had left the bus after the meeting and said, in Spanish, 'No me jodas' - [Don't fuck with me - ed.]"

Contador also revealed a series of mind games he alleges Armstrong and the team tried to play with him, including being forced to buy his own time trial wheels.

When the Tour de France eventually reached Paris, Contador beat Andy Schleck by 4:11, with a dour-faced Armstrong third overall on the final podium at 5:24. Armstrong retired after the 2011 Tour Down Under, and was eventually stripped of all of his seven Tour victories after being found guilty of doping for much of his career during a detailed USADA investigation.

Armstrong responded to Contador's revelations during an Instagram video message on Monday. He was expected to hit back but instead turned the other cheek and accepted defeat, saying he didn’t want to go back over the bitter spat.

"There was a little buzz in the cycling world about a recent interview that Alberto Contador did and I've been asked a lot to comment on this," Armstrong said.

"But there's really no comment. What I will say, and I guess this is a comment, and so I will say, is that the best man won in 2009.

"The last I checked it's mid-April 2020 and life is always about being forward and its not reverse or neutral, so I have no desire to go back and try to figure out who picked fights on the bus, who got wheels. It doesn’t matter, the best man won the race and it wasn't me. So I’ll end it with that."