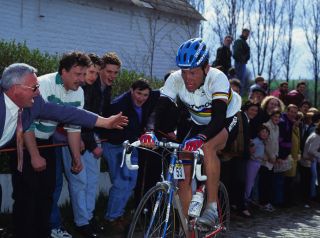 The film will only be aired in the USA on sports network ESPN, but for Americans abroad it will be possible to view if you have a subscription to the network. It's quick and easy to sign up to ExpressVPN to simulate being back in your home country, giving you access to ESPN as well as other US television and streaming services while out of the country.

In ESPN's new, upcoming documentary about Lance Armstrong, entitled LANCE, the former American pro admits that he began doping as early as the age of 21, and that his drug-taking could have contributed to his testicular cancer diagnosis in 1996. Armstrong was stripped of his seven Tour de France titles in 2012 and he confessed to doping in January of the following year.

"Probably… 21," Armstrong replied after a long pause when asked at what age he started doping in a clip from the film released by ESPN.

It means that he would likely have already been doping before he became the 1993 road race world champion at the age of 21, as he turned 22 less than a month after that victory.

"There's a bunch of ways to define doping," Armstrong continued in the clip. "The easiest way to define it is 'breaking the rules'. So, were we getting injections of vitamins and other things like that at an earlier age? Yes. But they weren't illegal, so that… You know…"

"But did you know?" Armstrong was asked by the documentary's filmmaker, Marina Zenovich.

"Know what?" he replied.

"What was in them [the syringes]."

"Of course. Oh, yeah, yeah, yeah. Come on," Armstrong said. "I'm not one of those guys. I was always, 'Ooh – what do we have here?' I always asked, and I always knew, and I always made the decision on my own. Nobody said, 'Don't ask; this is what you're getting.'

"I never, ever would have gone for that. I educated myself on what was being given, and I chose to do it."

According to various reports on the latest documentary, Armstrong is also asked whether he believes that his testicular cancer – which he was diagnosed with in 1996 – could have been as a result of doping.

"You know, I don't know the answer to that," he said. "I don't want to say no, because I don't think that's right either. I don't know if it's yes or no, but I certainly wouldn't say no.

"The only thing I will tell you is, the only time in my life that I ever did growth hormone was the 1996 season.

"And so just in my head, I'm like, growth… growing hormones and cells, like… if anything good needs to be grown, it does. But wouldn't it also make sense that if anything bad is there, that it too would grow?"

Following his return to professional cycling after cancer in 1998, Armstrong had no concerns over the potential adverse effects of a cancer survivor using EPO.

"In many ways – and this is not going to be a popular answer – EPO is a safe drug," he said.

"Assuming certain things, assuming [it is] taken properly, taken under the guidance of a medical professional, taken in conservative amounts.

"There are far worse things you can put in your body."

The new documentary will be aired by ESPN in two parts, on May 24 and 31.