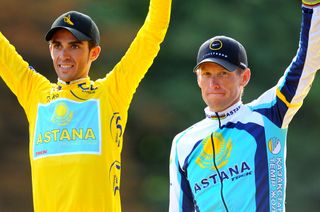 Banned for life from cycling which he once dominated, Lance Armstrong is still featuring in sports shows, with ESPN's 30 for 30 documentary series the latest to highlight the Texan's rise and fall into disgrace.

The sports channel launched a trailer of the documentary which will air on May 24 at 9 p.m. EDT this month.

The trailer features Armstrong and former teammate George Hincapie ("I did tell Lance to just come out and say it, this is real now") as well as former USA Cycling head Derek Bouchard-Hall ("all the praise we put upon him was all well deserved. Winning seven Tour de Frances [sic] is not easy. That's extremely difficult to do") and ESPN journalist Bonnie Ford ("I'm going to be naturally skeptical of whatever Lance does or says").

The episode is likely to delve into Armstrong's deception surrounding his use of performance enhancing substances to win the Tour de France seven times - victories that were taken away after the US Anti-Doping Agency's well-documented case against him and the US Postal Service team manager Johan Bruyneel and other staff and riders.

"I'm not going to lie to you," Armstrong says, "I'm going to tell you my truth."