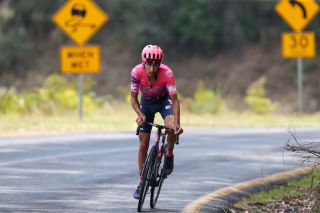 Lachlan Morton has admitted he will have to make a new attempt at the Everesting record after erroneous altitude data meant he failed to climb the 8,848m equivalent height of Mount Everest during his ride.

The EF Pro Cycling rider appeared to have set a new record of seven hours, 32 minutes and 54 seconds on Saturday during a carefully studied attempt on the short but steep Rist Canyon climb in Colorado. He rode the 1.9km, 11 per-cent climb, 42 times, beating US mountain biker Keegan Swenson by some seven minutes.

However, despite initial official approval of the record, further investigations by the Everesting officials found Morton's attempt fell short of the required altitude, because the Strava data for Rist Canyon climb was inaccurate.

Morton's Strava file showed he climbed 8,509m but this was initially explained as a "data lag with the elevation". However, a detailed investigation by the Canadian Cycling Magazine website and Hells 500, the organisation that validates Everesting challenges, revealed there was a significant issue with the accuracy of the altitude of the section of road, undermining Morton's data and record attempt.

"Digging further into his Strava data, we find that he was actually gaining only around 203m per climb (not 213m as listed on the Strava segment). If we multiply 203 x 42= 8526m, which is close to what his Garmin reported," Canadian Cycling Magazine wrote.

"There are often discrepancies between devices, and maybe Morton’s Garmin 1030 is faulty, and underreports elevation. That being said, looking at some other ride files from this month of people who have gone up the same climb, it seems like his reading is not the outlier."

"Based on the above data, and the contour lines on OpenTopography it seems that ‘
Back Side of Rist’ only actually gains 190m-200m. This would leave Lachlan Morton well short of the Everest height. Even if his Garmin’s 203m gain/lap is accurate, he would have needed to do 43.5 laps (not 42)," they concluded.

The difference left Morton 450m short of the Everest altitude. Hells 500 confirmed on its Facebook page that Morton’s ride hadn’t reached the threshold as an Everesting attempt. Swenson's attempt apparently does stand up to scrutiny and so stands.

"As painful as it is, we stand by our community’s decision to recategorise this as a (very large) Everesting Basecamp listing which means Keegan Swenson is restored at the top of the Everesting leaderboard,” the organisation wrote, explaining they will now change their procedure for record attempts by pre-approving Strava segments rather than retroactively analysing the data.

Canadian Cycling suggested that, in order to set a record attempt, Strava segment data needs to be verified by a secondary device to confirm the elevation gain, suggesting that bike computer head unit data or Strava data can be inaccurate.

"One thing we never anticipated when creating this challenge for our crew was that it would one day be raced by riders at the top level of the sport. In fact, ironically, this challenge was set up as the antithesis of racing!" Hells 500 said.

"That said, we appreciate and respect that whilst completion is the driving factor for the vast majority of participants, the appeal of setting new records for Everesting has clearly taken hold – and so we’ll need to adapt to that."

"Rather than retroactively applying additional rigor to our approval methodology after a new record is claimed, we feel that a fairer method is to pre-approve segments for record attempts. As mapping data varies in accuracy from country to country (and indeed the exact height of Everest itself is still a matter of some debate!) we will - to the best of our ability with the resources to hand - agree on a set elevation gain prior to an attempt."

"Unfortunately we will never know how the situation may have differed if Lachlan had the independent segment analysis to hand pre-attempt."

Morton said on Instagram he had checked the segment with Hells 500 but was ultimately responsible for his attempt. He accepted that he would have to make a new attempt if he wants the Everesting record.

Well looks like I gotta do it again 😂. (I checked this segment with them prior) lachlanmorton