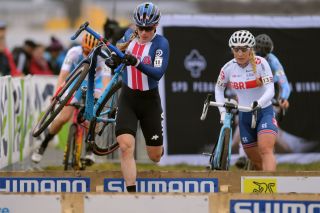 American cyclo-cross legend Katie Compton has vowed to compete for at least one more season after finishing fourth in the elite women's race at the UCI Cyclo-cross World Championships on Saturday.

The 41-year-old, a 15-time national champion, says she is having too much fun in the sport to walk away, despite the speed of her younger rivals. She is also considering continuing in the sport until the 2022 UCI Cyclo-cross World Championships, set to be held in Fayetteville, Arkansas.

"Today was a pretty good day after a pretty slow start due to getting stuck behind a couple of crashes," said Compton.

"All in all, I felt OK and went as hard as I could on a course which was really hard and heavy. It was really bumpy so I just tried to be smooth and get to that front group, which never happened but I've got to try.

"My start wasn't great, I definitely wasn't happy with that as I've been doing better at the starts, so to not have a good one today was disappointing but all-in-all it was a small part of the race. I don't know if I would have stayed with that front group anyway so I'm pretty happy with fourth.

"I've had some really good world champs and some really disappointing rides. I've gone through all the emotions, but now I'm just enjoying the experience and enjoying the day. I put my best effort in and whatever the result is, that's what it is."

Despite being older than her rivals, Compton has been competing at the front of the biggest races this season, with her best result coming with a third place at the Nommay round of the World Cup.

"I was really happy with that ride and felt really good that day," added Compton.

"I don't have as many days feeling good as I used to. They [the young riders] are super quick and great riders. They are super strong, fast, good technically and are really hard to beat. It's awesome to see as they are really young with tonnes of energy and it's good to see so many strong women coming up and riding so well."

Compton is committing to riding another cyclo-cross season after enjoying living and racing in Belgium over the past months.

"I'll be racing next year and haven't officially said when I'll be retiring but I'm definitely feeling my age and seeing the end of the tunnel soon," added Compton.

"I love racing my bike and love 'cross, the way women's racing is going and the progression of the women's racing, everything is getting faster and harder and just more fun.

"I kind of want to be part of that and I'm kind of sad that I'm feeling old and tired. I love the fact I can still mix it up at the front and have good days, I cherish those days. They mean a lot to me now.

"The racing has been fun and we're really enjoying it now. It's hard to walk away so I'm going to keep on one more season and make a decision. People will know when I retire - it won't be all of a sudden."

With the 2022 UCI Cyclo-cross World Championships taking place in Fayetteville, Arkansas, Compton says that it would be 'awesome' to compete.

"That would be a good time (to retire), yes," added Compton. "It would be awesome to get to Worlds in the US, but we'll see."