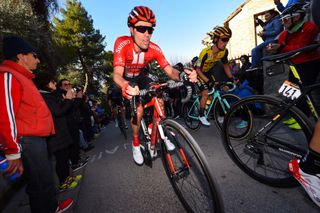 Tom Dumoulin has fully recovered from the knee injury that ruined his 2019 season, according to his new team Jumbo-Visma. The Dutchman, who missed a large part of the season with the injury, will have "no limitations" going forward as he prepares for the 2020 season.

Merijn Zeeman, a coach at the Dutch team, told De Limburger that Dumoulin is able to train with the same intensity as other riders, with no ill effect from his knee.

"His trainer Mathieu Heijboer and I, as a coach, worked extensively with him, and we no longer see any limitations," Zeeman said.

"It's the beginning of December, and no rider is where he needs to be. We will know more in January. But he is fully taxable again. We are now working with him at the same intensity as with the others. In any case, I'm very optimistic."

Dumoulin sustained his knee injury in a crash on stage 4 of the Giro d'Italia. He went on to finish the stage four minutes down on stage and eventual race winner Richard Carapaz, but was forced to withdraw the next day.

A month later, he rode six stages of the Critérium du Dauphiné in an attempt to salvage his season at the Tour de France, though he would later undergo surgery to remove crash shrapnel from his knee and subsequently miss the Tour.

In July, the 29-year-old was diagnosed with a tendon tear, which necessitated further surgery and put an end to his 2019 season. A month later, his move to Jumbo-Visma, after eight years at Team Sunweb, was announced after a painful divorce.

Dumoulin, who last Sunday raced competitively for the first time since the Giro, taking on a beach mountain bike race in the Netherlands, links up with compatriot Steven Kruijswijk and 2019 Vuelta a España winner Primož Roglič for 2020, with the Dutch team putting together one of the strongest GC rosters in the WorldTour.

For 2020, Dumoulin had aimed to target the Tour and Tokyo Olympic Games as his main goals, though recent speculation from La Gazzetta dello Sport suggest that Roglič would lead the team at the Tour meaning Dumoulin will instead head to the Giro.

The team, meanwhile, have not confirmed their plans, which will be finalised at their Calpe training camp next week.