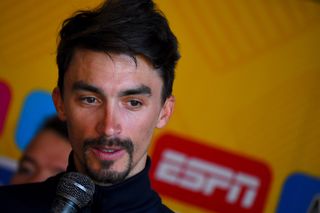 Julian Alaphilippe (Deceuninck-QuickStep) had a bit of a false start this season after abandoning the Vuelta a San Juan in Argentina last month after just two stages, a stomach bug and the inability to eat having robbed him of his strength.

But the 27-year-old Frenchman will be back in the saddle this week at the Tour Colombia 2.1, hoping to get his season back on the track it took in 2019, when he seized 12 wins, including Strade Bianche, Milan-San Remo, Flèche Wallonne and two stages at the Tour de France. Alaphilippe also wore the French Grand Tour’s yellow jersey for 13 days, driving his countrymen into a frenzy.

Alaphilippe started his 2019 season in fine form in Argentina, taking two stage wins there and then adding another in Colombia. He’s hoping to replicate that early season form again after shaking off the bug and traveling to Colombia early to train with some teammates.

How to watch the Tour Colombia 2.1 – live stream, TV, results

Tour Colombia 2.1: Lighting off the fireworks in South America – Preview

Van Garderen: Home field advantage going to be very much in play in Colombia

“For sure I want to see our team win a stage,” he said Monday at the official press conference in Paipa. “There are a lot of possibilities to win stages this week with [sprinter] Alvaro [Hodeg] and stages that are more difficult for Bob [Jungels] and me. I’m motivated and the shape is good.”

Alaphilippe instigated and helped drive the race-defining move last year, getting into a breakaway on stage 5 to La Union that also included overall race favourites Miguel Angel Lopez (Astana), Richard Carapaz (racing at the time for Movistar), Daniel Martinez (EF Pro Cycling) and Ivan Sosa (Team Ineos). Alaphilippe took the stage win and race lead on the day, but he’d surrender it to Lopez up the climb of Alto de Palmas on the final day. Expect similar antics from the precocious rider again this year.

“I hope to be in good shape to continue to do some attacks and try to win a stage,” he continued. “For sure it will be a little bit more easy for Egan [Bernal] to win, because it’s always hard here in Colombia.”

The race won’t dip below 2,590 metres of elevation this year, making it tough going under any circumstances, but the climbs on offer in 2020 are not quite as difficult as last year. Alaphilippe’s teammate Bob Jungels, who won the stage in Medellin in 2019, addressed this year’s route during the press conference.

“I think this year the roads might be a little easier on paper than last year,” the Luxembourg champion said. “But I think here at altitude nothing is really easy, but we will see. We hope to be as successful as last year.

“When we were here last year, we combined the race with a training camp and it worked out really well," Jungels said. "The main reason why we came back is Colombia is a wonderful country and we’ve had super good training. And, like I said, the start of the season was ideal after that, and I think from the organisation to the hotels and all the race courses, it’s ideal for us to prepare again, and we are very happy to be here.”

Alaphilippe agreed with his teammate’s assessment of the country they’ll be racing in for the next six days, and he added a bit more.

“It’s always nice to be in Colombia because of the atmosphere and the people, just everything,” Alaphilippe said. “If I can, I would like to continue every year to start my season here.”