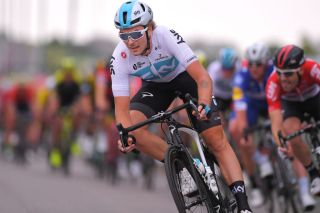 Jonathan Dibben will return to the WorldTour in 2020, signing a one-year contract with Belgian team Lotto Soudal.

The 25-year-old, a former world champion on the track, turned pro on the road with Team Sky in 2017 but did not have his contract renewed for the 2019 campaign.

The Cyclingnews guide to 2019-20 rider transfers

He returned to the track over the winter and has been competing on the road at domestic level in Britain with the Madison-Genesis Continental team.

"I met with [team managers] John Lelangue and Marc Sergeant during the Tour this year and it just seemed like a really good fit," Dibben said.

"The role I will have in the team and the races that will be on my schedule seem perfectly suited to what I want to be doing or what I think I can I do well at in racing."

Dibben will slot into the Lotto Soudal squad as a member of the lead-out department for sprinters Caleb Ewan and John Degenkolb. The 25-year-old won the points race at the Track Worlds in 2016, and his sole pro victory on the road came in the individual time trial at the 2017 Tour of California. He is also suited to the Classics, having finished on the podium of the junior Paris-Roubaix and the U23 Tour of Flanders.

"In the past, I have been involved in the sprints and I have already worked in lead-outs. With the way Caleb Ewan has showed himself this year and with John Degenkolb arriving next year, it will stress the sprint aspect in the team even more.

"Lead-out riders are really important in racing, which is something I am very good at. Lotto Soudal is also a Belgian team, so they know all about the Classics. The team really suits my character as a rider and I'm really looking forward to it," Dibben said.

"I am more the type of rider for the faster kind of racing and to form the sharp end of the bunch sprint. But I also want to keep progressing in the time trial area, and I hope to attain some nice individual time trial results.

There are races that include sprints all over the year, so my main role will be to work for the sprinters if they are present. Otherwise, I'll be looking to race attractively myself and have a go in the breakaway. I want to keep progressing to where I've been, which means riding some of the bigger races and being involved in the racing a bit more."