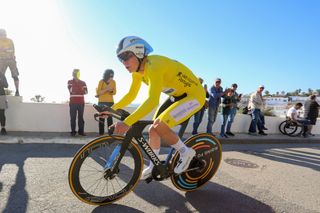 Deceuninck-QuickStep's Remco Evenepoel has scouted two of the key stages of this year's rescheduled Giro d'Italia while in Italy on a team training camp. The 20-year-old Belgian will take on the three-week race from October 3-25, and is considered a possible GC threat, despite it being the first Grand Tour of his career.

Evenepoel is currently in the Italian Dolomites, based at the Val di Fasso ski resort, along with his Deceuninck-QuickStep teammates, on an 18-day altitude training camp, but found the time last Friday and Saturday to do reconnaissance rides of the routes of the stage 14 individual time trial from Conegliano to Valdobbiadene and the mountainous stage 15, which starts at the Rivolto Air Base in Codroipo and ends with a summit finish at the Piancavallo ski resort.

"It was great to be on the roads of two important stages of the race, both for me and the team, and to have an early look at what will be on the menu of the race's third weekend," Evenepoel said on his team's website on Sunday.

"I'm not going to lie, the route is difficult, but now we know it better, and this info will be useful in October," he added. "Even with bad weather, the roads are really good, and being back on my Specialized Shiv [time trial bike] felt great, especially as this year I rode only two stages against the clock before the season was stopped."

Evenepoel: Can I win the Giro d'Italia? Let's see on October 25

Those two time trials came at the Vuelta a San Juan in Argentina in January and at the Volta ao Algarve in Portugal in February, and the current European time trial champion won both en route to taking the overall titles at both stage races.

Dependent on how he's holding up after two weeks of racing by that point, Evenepoel would on paper be one of the favourites for the 33.7km-long Valdobbiadene time trial on October 18.

Should he also be in the leader's pink jersey by that point – or take the jersey as a result of a good time trial performance – Evenepoel would then have to defend his lead on the next day's 183km stage, which includes the three climbs of the Sella Chianzutan, the Forcella di Monte Rest and the Forcella di Pala Barzana before an fourth and final climb up to the finish at the Piancavallo ski resort.

Although it will be Evenepoel's first time at the Giro, he'll be able to count on both the experienced of his team and the knowledge gleaned for himself through the reconnaissance rides of the two stages.

"On Friday, we rode the Piancavallo stage, followed one day later by the time trial between Conegliano and Valdobbiadene, which is almost identical to the one in 2015 – albeit much shorter – and will be very important three months from now," said Deceuninck-QuickStep trainer Koen Pelgrim, referring to the 59.2km time trial from Treviso to Valdobbiadene at the Giro five years ago, when the stage was won by Team Sky's Vasil Kiryienka.

"We reconnoitered many of the roads and the tricky descents from five years ago – elements that can make it very difficult," said Pelgrim. "It was a useful test for Remco, as he got to see the course and discover what the main obstacles will be."