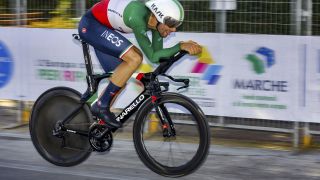 Italy’s Filippo Ganna will start 90 seconds before his Ineos Grenadiers teammate and defending world time trial champion Rohan Dennis in Friday’s TT contest for elite men, hoping his rapid development in the last 12 months can help him set a faster time than the Australian on the 31.7km out-and-back course in Imola.

Ganna beat Dennis in the recent 10km time trial at Tirreno-Adriatico, setting a new record time for the course and bettering Dennis by 26 seconds. Ganna won the bronze medal last year in Yorkshire behind Dennis and Remco Evenepoel (Belgium), but Dennis caught and passed him during the 54km time trial.

The two are part of a special Ineos bubble at this year’s World Championships, created by the wealthy WorldTour team to protect their riders from the risk of COVID-19 contagion a week before the start of the Giro d’Italia.

Cyclingnews understands Geraint Thomas is also part of the protective Ineos bubble rather than staying with the Great Britain Federation team. Ineos is providing safe accommodation, a carer, mechanic and chef, coordinated by their team’s Australian directeur sportif Brett Lancaster.

Staying together has no doubt strengthened their friendship but also their friendly rivalry.

“For sure Rohan’s not a loser, his palmares shows that,” Ganna said of Dennis and his impressive time trial results during the Italian squadra’s video press conference. “We’re teammates and almost like brothers, but the World Championships are different and so may the best rider win!

“In truth, I can only learn from him. I beat him at Tirreno but he's on form and motivated. I just hope he’s not as strong as last year and that he doesn't catch me.”

Ganna is still only 24 years old but has developed massively since leaving UAE Team Emirates for Ineos Grenadiers. He has twice dominated the individual pursuit event at the track World Championships and is the current Italian national time trial champion. With Vincenzo Nibali still doubtful of his form for the Sunday road race, Ganna is Italy’s best hope of taking a world title in Imola after Italy stepped in to replace Switzerland as host of the UCI Road World Championships.

“There’s no extra pressure, we’ve done the work, we’re not unprepared,” Ganna said. “My form is still good. I’ve been up to altitude for a final block of training for the Giro d’Italia and so now we’ll see what happens. The Tirreno time trial was 20 kilometres shorter than this 31-kilometre course, so I’ve got to judge my effort.

“This is my second elite Worlds and so I hope to do well again. It won’t be easy this year but I’m not riding just to make up the numbers. We’ll know what I can do when we hit the finish line and stop the clock.”

Ganna revealed he had seen Chloé Dygert’s high-speed crash during the women’s time trial, suggesting he will be even more careful on that sector of the course.

“I’ve ridden there at high speed in training and practiced my race plan on the course,” Ganna said, aware of the risk of time trialling when chasing a world title.

“You have to keep hands down on brakes in that sector. Guard rails can be like a razor, and so when you hit it, anything can happen. I hope Chloé Dygert is OK and can make a full recovery.”