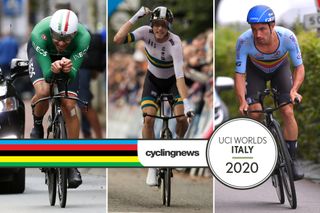 With a stacked start list ahead of the men's elite 2020 UCI Road World Championships time trial on Friday, Cyclingnews spoke to time trial specialist and coach Marco Pinotti in order to get a grasp on who might triumph in Imola.

The former rider and six-time Italian national champion in the race against the clock listed his main favourites for the 31.7km course, picking out some familiar names that he's worked alongside, as well as a few new faces.

From the reigning world champion to relative newcomers to elite time trialing, they're all on Pinotti's list. Read on for his expert breakdowns.

Dennis comes into the race as the two-time world champion and even though it doesn't seem as though he has the same level of form as he had last year, you can never count him out for the gold medal.

He knows how to win these events, and how to target specific goals, but it's hard to say where he is right now. He was third in the Tirreno-Adriatico time trial behind teammate Filippo Ganna and Victor Campenaerts, which is the only clear sign of his form since lockdown ended.

However, you know with Dennis that he's able to find that extra switch when it comes to the major events and that's something that not all riders can do.

He hasn't won a time trial this year, and was second in the nationals back in January, so he has plenty of reasons to head to Imola – not with anger – but with motivation and the grit to put in a winning ride. He'll want to confirm his position as the best time trialist in the world and match Tony Martin's run of three titles in a row.

I don't want to put pressure on Ganna, but the course is fast and he's going to be in the top five. He will be aiming for gold, the course is well-suited to him, and he's not lost a time trial since the start of the year. My only concern for him is going to be the wind because we could have one side of the course favouring a smaller or skinnier rider, like Dennis. That means that Ganna, who weighs more, will gain something on the tailwind part but could suffer if there's a headwind.

He comes into the race as a serious contender though, and on home soil he'll be aiming to become Italy's first winner in this discipline for the men. As a nation we've been close a few times but never quite made the top step, but Ganna is in great form. He easily won the time trial in Tirreno, and although that was a shorter course at around 10km, it's not as though we're comparing a four-minute effort with a 40-minute one. This time trial will take around 35 minutes depending on the conditions.

My only advice for him is that he shouldn't go into the race thinking that he's the number one favourite. He shouldn't read this article or the newspapers in the days leading up to the race and he just needs to keep the pressure of his shoulders. From what I've seen he's good at that, but he needs to approach the race at 100 per cent and not be distracted.

Campenaerts is the final rider coming from Tirreno-Adriatico that I think has a very strong chance of being in the top three. He was some way down on Ganna in the time trial in Tirreno but he still managed to beat both Dennis and Geraint Thomas, so his form is clearly going in the right direction.

It's also a very good course for a rider like Campenaerts, who can turn a gear over a course like this. I know that he's not won a race this season but he's been quite consistent against the clock and I don't see that changing this time around.

He's also a rider that works a lot on his position and aerodynamics - he's one of best around in that regard - but while he's a level below Ganna and Thomas, he's still in a good position for a medal.

It's really hard to predict the form for riders coming to the Worlds straight from the Tour de France. Out of the batch that includes Van Aert, Tom Dumoulin, and Rémi Cavagna you can probably expect one or two of them to drop a couple of per cent between Paris and Imola.

That's just a natural occurrence that happens after three weeks of racing and when you've been focussing on team or individual duties that aren't completely dialed into the preparation for the World Championships.

The difference might be Stefan Küng, who left the Tour early, but for me I'd put Wout van Aert ahead of the rest of the Tour de France riders. The Belgian put in a huge effort in the final time trial in the Tour and he could be a major contender for both the road race and the time trial.

Here, I would give Rémi Cavagna, Geraint Thomas and Tom Dumoulin the same status.

I was impressed with Cavagna in the last few days of the Tour, and although Thomas has never medalled in this time trial he clearly has good form from Tirreno-Adriatico. If he's focused, he can do a good result.

Dumoulin is in a similar position, but you know that with a rider like him he's only going to ride the time trial if he thinks he has a good chance of winning. He's not going to come here after the Tour de France just to ride around.

I think that Patrick Bevin and Alex Dowsett, who both had good results in the time trial last year to finish fourth and fifth, respectively, will also be up there this time around.

I know Dowsett had some mechanical issues at Tirreno but he's riding well, and I know Bevin from CCC, and of course BMC before that. As for Küng, who was third last year in the road race, like I said, he pulled out of the Tour to concentrate on this and he has the pedigree to do well on this course.